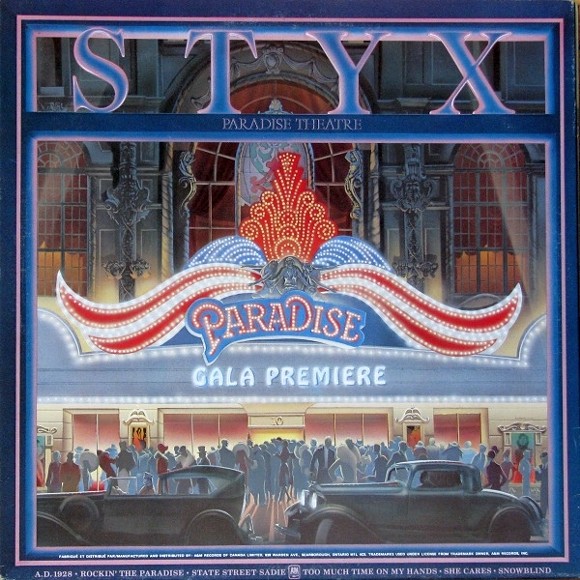 Last night, for reasons entirely too convoluted to explain, I was standing around in a Palm Springs casino showroom that was empty except for myself, my traveling companions, a tight-knit and highly efficient road crew, and the six members of Styx, who were onstage for a sound check.

And although I've loved Styx since I was old enough to care about music, my opinion about the band completely changed as I watched them prepare for that night's sold-out show.

Most bands running the casino circuit in 2016 would be expected to be cynical, rote, and bored. Styx was not. The band members (some of whom have been sharing stages for 40-plus years) joked and laughed with one another; guitarist Tommy Shaw fretted about whether his guitar intro to "Crystal Ball" the night before in L.A. was at the wrong tempo; and, perhaps most surprisingly, the band spontaneously broke into a loose-limbed runthrough of David Bowie's "Blackstar."

On one hand, you'd hope that any rock band playing on stage gives a shit about music and actually enjoys playing (and listening to) it, but, really, the assumption is always that these AARP rockers are just going through the motions in order to pay their mortgages or keep the IRS at bay. Watching Styx – a band that has always been incredibly unfashionable, even when at their most successful – show more enthusiasm and engagement (during soundcheck!) than many contemporary indie bands show during their actual shows got me thinking about the cudgel of critical bias.

Why, after all, should all discussions about the corn-fed classic rock  of the '70s – Styx, Kansas, REO – include punchlines about state fairs and dismissive notions of "guilty pleasure"? These are bands that have literally busted their asses for music for decades, writing inescapably memorable songs and playing generous and fan-focused sets (with real instruments!) in front of crowds that could be 400 at a fair, 2,000 at a casino or 10,000 at a biker festival. They are the truest of the true believers, but because they came of age in the music industry's most rapacious era, they're somehow seen as equally greedy and artless as the record labels that profited from them.

But, you know, Styx made some pretty great records, and in some alternate universe, I could write a Best New Reissue compendium piece about their Numero Group box set and describe them as lost-to-history Midwestern rockers that seamlessly and uniquely blended progressive rock structures, Beatlesque melodies, hard-rock punch and show-tune bombast, and you'd think entirely differently about what you were hearing.

Instead, I'm standing in a Palm Springs casino showroom later that evening, watching these 60-year-old dudes leave everything they've got on stage, playing spot-on versions of their hits and deep cuts in tempo and on key, engaging with their fans (they even took selfies with them from the stage), and throwing not one, not two, but three Bowie covers into the setlist. (Turns out Styx opened for Bowie back in '73.)

Anyway, their last great record – Paradise Theatre – came out 35 years ago this week, and its tour was the very first rock concert I went to of my own volition (hi, I'm old!). Thanks to the thousands of shows I've seen since then, I've gotten blasé about seeing live music, but I was amazingly reinvigorated by seeing this band that literally should be sleepwalking through their sets, instead, give everything they've got and still love doing it.

I'm gonna go back and give Paradise (and all the other good records that came before it) a fresh-ear and unbiased listen, and maybe you should too. And while it may not be easy to un-hear decades of rock-canon indoctrination, maybe you might want to consider checking Styx out when they play the Amway Center on Jan. 30 with Def Leppard and Tesla. It won't be the coolest show that week, but it will definitely be the best, and who knows, it might even give you a new perspective on how much of a bummer it is to worry about being cool all the time.