by Monivette Cordeiro and Marissa Mahoney

For the next year, Orlando Roman can say he makes the best traditional coquito in the city.

Roman won Orlando's first Coquito Masters competition last week against several other contestants at the Asociación Borinqueña on Econlockhatchee Trail. Coquito, a Puerto Rican beverage similar to eggnog, is a delightful mix of rum, coconut milk, condensed milk, vanilla, cinnamon and other spices. While Roman stuck to the traditional, other contestants made fusion drinks that used pistachios and chocolate. 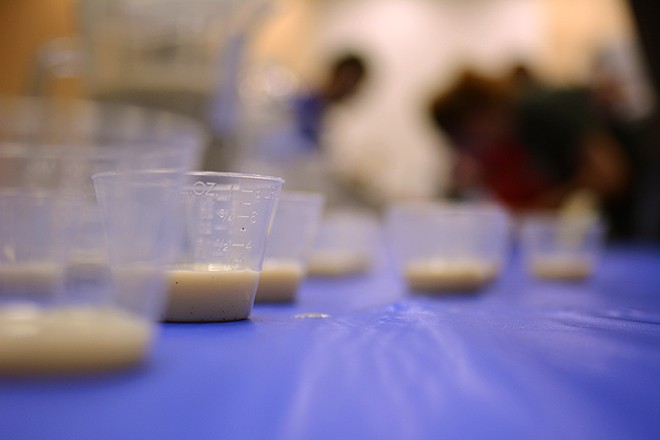 After getting slightly tipsy on some of the stronger coquito recipes, we asked Roman to share some of his secrets and tips for making the beloved beverage.

Orlando Weekly: When did you start making coquito professionally?

Orlando Roman: I’ve made it over the years, and I’ve always tried different recipes. When I found this one, I figured, let me focus on it and get fresh ingredients. I like watching “Chopped” competition on the TV, and I know what it takes to compete on that level, so I knew I had to do something special. I was searching on the Internet and found this competition, so I figured I’ve give it a shot.

Roman: I can’t do that, because I’m going to try to compete with it next year. To me, the key is about using fresh ingredients, like instead of using milk from a can, I’ll make the coconut milk. I try to make it two days before I’m actually serving it, because when you’re dealing with certain types of milks, you have a short shelf life. I’ll never have to for more than a week because it has the best flavor when it’s really fresh. You know how KFC has 11 herbs and spices? I’ve got that and more.

OW: So what have you learned over the years in making coquito?

Roman: People have different opinions about how strong the alcohol taste should be. I was talking to my relatives in Puerto Rico who told me it’s about the taste, not the alcohol, but then you talk to my male friends, and it’s different. This is something I would make for my family. For my boys, it would be much more stronger, more Bacardi 151. On the island, they like to make it the old-fashioned way, but now we have fusions, which I like. Next year, I'll probably try that.

OW: Do you find there’s a difference in taste in between using white rum or dark rum?

Roman: I haven’t tested that yet. I use two different rums, and one is stronger than the other, so I have to find the right balance. Everyone will have have their preference, and there are some that are quite strong, like I took one sip and I had to throw it out. It’s based on who the person is and what their preferences are.

OW: So a controversial question: Egg or no egg in your coquito?