Look at the gross, amazing burgers that could be at the Florida State Fair 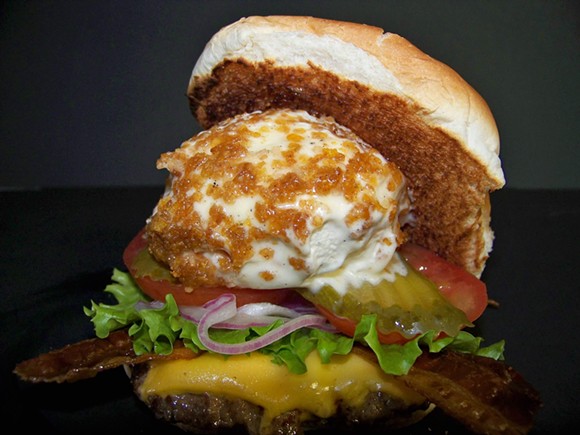 The Florida State Fair is happening early next month in Tampa and bringing all kinds of culinary (mis)adventures with it.

Before the fair starts on Feb. 4, you will have the chance to vote for one of four burgers hoping to get the "People's Choice" award and appear on the fair menu, according to the Tampa Bay Times. The nominees include:

Ice Cream Burger: See above. This concoction includes a beef patty, cheese, bacon, tomato, onion, pickle and a scoop of "Mexican-style fried ice cream," according to the Times.

French Toast Burger: This burger has the same basic ingredients of your bacon cheeseburger, but instead of buns, it's sandwiched in between slices of drizzled French Toast.

Bacon Bomb Explosion Burger: Bacon on bacon on bacon here. This burger has a ground chuck patty with bacon crumbles and then wrapped in bacon. It adds cheese, lettuce, tomato, onion, pickles and of course, some more bacon strips.

Some honorable mentions that will be at the fair but won't be competing include a pizza funnel cake; peanut butter and jelly and bacon quesadilla; a Double Barrel burger that includes a glazed donut as a bun and a scoop of macaroni and cheese; a Southern Belle burger that has fried green tomatoes and a fried egg; and a deep-fried birthday cake pop.