Enzian Theater presented their expansion plans to the Maitland Planning & Zoning Commission on Thursday night, drawing questions from commissioners and criticism from about a dozen citizens who live near the theater.

The plans – similar to those first revealed by The Orlando Weekly in 2013 – call for the addition of two theaters (both much smaller than the existing house), a new lobby, restrooms and employee offices on the north and east sides of the existing structure. On-site parking will be increased by 17 spaces (from 95 to 112), according to civil engineer Jay Jackson of Kimley-Horn and Associates, Inc.

“We think we’ve dealt with parking,” he said.

His comments were echoed by both Enzian governing board member Philip Tiedtke and executive vice president Elizabeth Mukherjee, who discussed an increased partnership with Park Maitland School that would allow valet parking for roughly 100 vehicles. Mukherjee also stressed that, with the forthcoming addition of two crosswalks at U.S. 17-92 (Orlando Avenue) and Magnolia Road, parking at First Watch (across U.S. 17-92) would be safer for Enzian patrons. But most of the neighborhood residents who spoke weren’t convinced, several expressing anger at both the Enzian and police for not taking the parking situation more seriously.

“This has gotten worse over the years,” said Erin Miner, whose Magnolia Road property is adjacent to the Enzian. “We’re now going to have a facility that can seat up to 420 people, … and there is not enough [parking] when you use Park Maitland. … When their parking lots are full, they’re valet-parking their cars in our neighborhood. … People still literally pull up into our yard and park. We’re told by Enzian staff to calm down and not get upset. We have a crappy-looking yard now.”

“Parking: I’ve put up with it,” said Bill Mahoney, who also lives on Magnolia Road. “Enzian Theater I love, … but in the city of Maitland, you have to have parking for the cars that you have on your property.”

“My concern is also parking,” Commissioner Michael Dabby said. “A parking study will need to be done for this.” 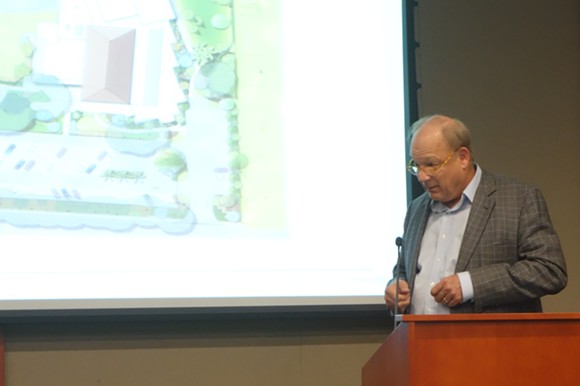 “This is a challenging situation,” said Commissioner Kathy Hattaway. “Clearly mistakes have been made by the Enzian.”

Commissioner Michael Thomas also voiced concerns but reserved most of his criticism for city government and the police. “I think the city has dropped the ball” on parking enforcement, he said.

Still, Dabby and other commissioners said they recognized the value of not ruining the existing property’s aesthetic by building toward U.S. 17-92 (which would be the traditional method) or erecting a parking structure, which Mukherjee pledged the Enzian would not do. And several commissioners hinted that they would support the project if the parking issues were addressed.

“I’d like to see this move forward in some form or fashion,” Dabby said. Commissioner Barry Kalmanson echoed, “I think this is a great project.”

Those comments prompted one neighborhood resident to shout from the audience: “Is this a done deal already?”

No, commissioners responded, stressing that issues needed to be resolved and the process was ongoing. Commissioner Sara Blanchard speculated, when pressed by Dabby, that the project would likely come before the Commission again in four to six weeks, when citizens would have another chance to speak.

Parking was not the only complaint. Residents also discussed increased noise, trash, traffic flow and removal of vegetation, with Miner and others suggesting the Enzian expansion might be better suited to the new cultural corridor being constructed near Maitland City Hall.

“We still anticipate breaking ground in August,” Mukherjee told me before the meeting. “We will have a few more city benchmarks [and] reviews between now and our official project approval, which should take about three months. That would potentially put us before the City Council in April. While there are several parts to the review of this project, including Thursday's meeting, none of them involve official verdicts until that council meeting. Staff and committee members will be submitting recommendations that will go to the City Council, and the City Council will make the final decision, we hope, in April. So while they are only recommendations, they are very important recommendations. Then we think permitting will take about three to five months, and after that's complete we will be able to stick a shovel in the dirt.”

But she too suggested that compromises might be necessary, including either permanently canceling the Enzian’s outdoor “Pitcher Shows” (which have already been temporarily halted) or partnering with the neighborhood to fix what even Tiedtke admitted was a parking “mess” on nights when movies were shown both inside the theater and outside on the lawn. (Indeed, though the outdoor movies have little to do with the proposed expansion, they received the harshest criticism of the evening, with residents complaining not just about parking and noise but also the sometimes sexual and violent nature of the films.)

The current theater’s capacity is 230, which would be reduced to 210 after the opening of the additional two screens, according to Mukherjee. The new theaters would hold 80 and 50. Adding the roughly 80 seats at Eden Bar, that would bring the potential on-property attendance to about 420, not counting patrons mingling in the new lobby or those attending special events on the lawn during the Florida Film Festival. By comparison, the total on-site attendance during a single sold-out indoor movie and a crowded outdoor screening is about 500. Therefore, if outdoor screenings were permanently discontinued, the property’s maximum occupancy might actually be reduced, even with the additional two screens.

Tiedtke stressed that the Enzian had already experienced the types of crowds the theater expected to receive if two screens were added.

“We do a couple of big events a year – really big ones – where we have many more people than the number that would just come to the movies and sit at Eden Bar and have dinner, and already we’ve been practicing this valet-parking thing, and for those events, that’s already happened,” he said. “And those events – it runs very smoothly. … So we’ve already tested this thing. It’s not a kind of one of these things that somebody does on paper, hoping it’ll work.”

For more information on the proposed expansion, see www.enzian.org/forever.