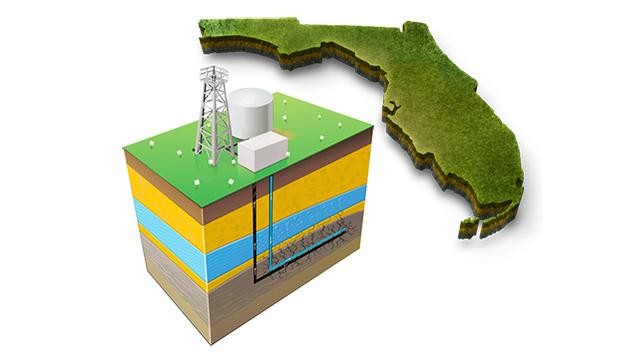 Lest you think that the state Legislature’s attempt to permit fracking in the state of Florida is only hypothetical, here’s a scary tidbit we learned today: Both houses of the Legislature are considering an industry-friendly bill that would lay the groundwork for fracking to happen in the state, and at least one version of that bill could be passed in the House as early as next week.

The House version of the bill (HB 191, filed by Rep. Ray Wesley Rodrigues, R – Fort Myers, who once filed another bill that would help fracking companies keep info about what chemicals they used under wraps) has already sailed through three committees and its first and second reading. It’s scheduled for a third reading on the Special Order Calendar on Jan. 26. The Senate is (as usual) behaving in a somewhat more considered manner, and its version of the bill (SB 318, sponsored by Sen. Garrett Richter, R – Naples) is still in committee. But that doesn’t mean it’ll stay there for long. (Read a Reuters story about the bills here.)

Here’s the lowdown on those bills: As we’ve reported in the past, they would pre-empt local governments from doing anything to protect their communities from fracking. No zoning laws would be allowed that would keep it out of certain zones, no local rules by which companies that wished to engage in fracking would have to abide, and certainly no bans on the practices would be permitted. The bills do lay out some basic state rules that companies would have to follow in order to frack – they would have to apply, a study would have to be conducted, they’d have to obtain permits – but the process would be overseen by the state Department of Environmental Protection and would be subject to review by the Legislature and the governor, who would have been responsible for allowing fracking to happen in the first place. No independent scientific analysis would be required.

Worse: The bills cover only hydraulic fracturing, the practice of using high-pressure to inject water, chemicals and sand into the earth to create fractures in bedrock that release oil and gas trapped underneath. That’s not the kind of fracking that actually takes place in Florida, according to Kim Ross, president of a Florida nonprofit organization called Rethink Energy Florida, which exists to encourage energy independence via sustainable energy sources. (For the record, her organization supports a full ban on fracking in Florida.)

“The type of fracking that would occur in Florida is called acidization,” she says. “Rather than create fractures in the rock, this practice actually dissolves the rock, releasing the natural gas and oil, which then flows up. The fracking regulatory bill only covers hydraulic fracturing. … It would allow this acidization to go unregulated. And that’s the most common form of fracking we would have. It is a huge deal, because they say we’ll have a study before we frack, but they won’t be studying the right thing.”

Ross says she’s been following the Legislature’s activities surrounding the fracking issue for the past four years, and she thinks these bills are deceptive.

The last thing to know about these bills: Over the past year, 65 counties and cities in Florida have passed some kind of resolution that expresses opposition to fracking or outright calling for a ban on fracking within their boundaries. The language in these bills being considered right now states that the only local restrictions on fracking that would be permitted would be those “adopted before January 1, 2015.”

That’s not some arbitrary date, as Ross points out. Most of the local ordinances on fracking that exist now weren’t adopted until after Jan. 1, 2015, so they’d all be nullified if this bill were passed.

“It’s frustrating to see, because when you talk to people, there are very few people who stand to benefit from these rules,” Ross says, pointing out that the amount of oil and gas obtainable in Florida would do little to nothing to help the nation achieve the energy independence politicians say they want. “And there are a lot more people at risk of losing a lot.”

What does the pro-fracking community say about the opposition to these bills? According to a story published in TribLive, David Mica, executive director of the Florida Petroleum Council, says it’s a NIMBY issue. When the state Association of Counties announced its opposition to the bills and called for a moratorium on fracking until independent studies could be completed, Mica said theirs was “an extremist point of view.”

If you’re concerned about fracking, Ross and other environmental advocates say, don’t think there’s nothing you can do about it – contact your elected representatives. Senators, in particular, she says, have expressed some concerns about how fracking could impact the state.

“I know a lot of people are frustrated with the political system and they say, ‘Well, I don’t want to get involved because they don’t listen to us anyway,’” Ross says. “But the reality is, the oil and gas industry has well-paid people up here going from door to door and sitting down and talking to those legislators. If we as a citizenry don’t stand up and say anything, the oil and gas industry’s voice is the only voice that gets heard, and it will be heard loudly. So what we need is everybody to get involved.”

You can find your state Senators and Representatives, as well as their email addresses, here and here.