With World of Coke opening at Disney Springs, will Club Cool remain? 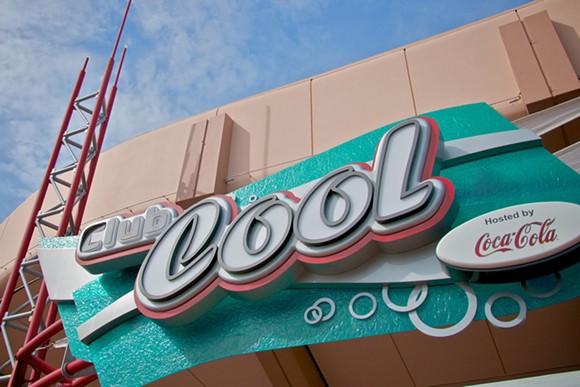 Disney Springs is continuing its transformation, with most of the focus on the new restaurants and higher-end retail. While these aspects are a part of the move from the 1990s Downtown Disney to the more aesthetically pleasing Disney Springs, the transformation also means the addition of new tenants.

A World of Coke now looks to be moving in near Planet Hollywood. The new World of Coke has yet to be confirmed, but the building where it is rumored to be located did recently have retro-style Coca-Cola advertising painted onto it.

The new three-story building is much smaller than the World of Coca-Cola in Atlanta. That attraction features a 4-D movie, a museum, a tasting room and a large gift shop. While no official confirmation or details on the Disney Springs location have been announced, the size of the building points to this being a smaller version of the Atlanta location. A tasting room similar to the Club Cool at Epcot is expected to be the central feature of the new Disney Springs location. Club Cool features eight flavors, while the Atlanta World of Coke offers many more.

It will also feature a large retail section. While the gift shop in Club Cool isn’t that popular, the new Disney Springs location will be much larger and include many items not found in the smaller location.

The building also seems to have some usable rooftop space, possibly for a café or special events. The outside of the building keeps to the faux-historical theme that is used throughout Disney Springs. While the inside isn’t finished, glimpses through the windows reveal a similar mix of classic brick with modern touches.

With the new World of Coke opening at Disney Springs, will Club Cool at Epcot remain? Club Cool originally opened as Ice Station Cool in 1998, remodeling and reopening as Club Cool in 2005. Numerous nearby attractions, including all of Innoventions West and the majority of Innoventions East, have recently closed. While some temporary attractions, mostly meet-and-greets and lounges, have opened in the area, there are some rumors of a large scale redo of the Innoventions Plaza in the coming years. That could include the closure of Club Cool leaving the new Disney Springs location as an alternative.

Based on current construction, the new World of Coke should be finished and ready to open by this summer.