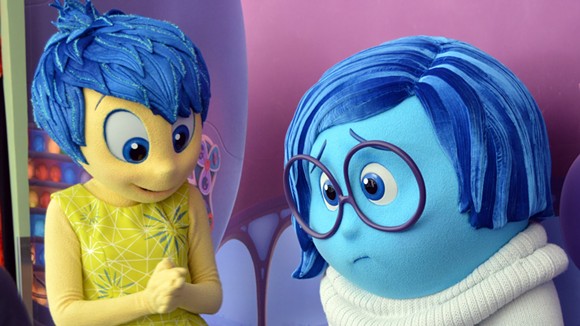 Baymax recently took up residence at Epcot in the former Innoventions West. The new meet-and-greet, sans Hiro, is across the breezeway from the Character Spot where other meet-and-greets are located. Well, poor Baymax won’t be lonely for long. Disney is expected to announce within the next few days that Joy and Sadness from last year’s Inside Out will be joining Baymax in the new location.

An Epcot presence for Inside Out has been rumored since long before the movie even opened. The Pixar blockbuster that follows the emotions of a pre-teen girl is very similar to the former Epcot attraction Cranium Command.

Joy and Sadness have made appearances at Walt Disney World before, including at a Disney Blog meet-up preview of Inside Out, but this new meet-and-greet will be the first permanent presence from the film on the East Coast.

A former, temporary preview of the film did take place in the Magic Eye Theater at Epcot. That theater, which more recently hosted a return of Captain EO, now hosts the Disney Pixar Short Film Festival (featuring some of the same short films as the Pixar Short Films Collection DVDs).

In California, Inside Out has an odd pre-parade float that drove through California Adventure, but the only regular meet-and-greet of Joy and Sadness has been in Hong Kong.

The new Epcot meet-and-greet is expected to open by mid-February.

The Gist Epcot Inside Out Joy Sadness Meet and Greet