New bill would make performing an abortion a felony in Florida 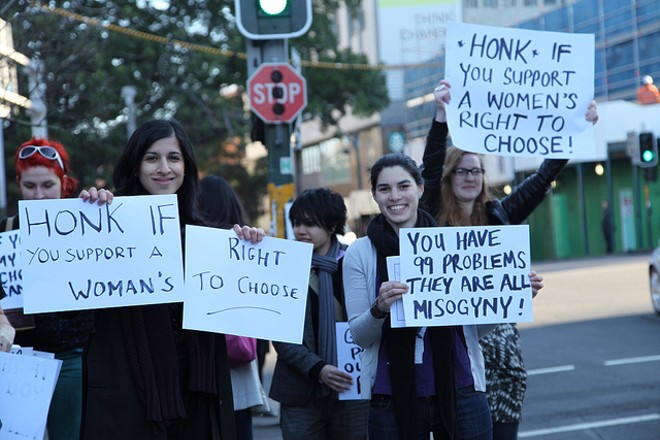 Despite the fact that U.S. Supreme Court justices affirmed that women have a right to abortions in Roe v. Wade, some Florida lawmakers are ignoring this 43-year-old ruling and proposing a bill that would pretty much ban abortions in the state.

The Miami Herald reports the Florida House's Criminal Justice Subcommittee voted to advance HB 865, a bill that "would make performing an abortion or operating an abortion clinic a first-degree felony in Florida, punishable by up to 30 years in prison."

The bill says the Legislature "acknowledges that all persons are endowed by their Creator with certain unalienable rights, and that first among these is their right to life. The Legislature finds that all human life comes from the Creator, has an inherent value that cannot be quantified by man, and begins at the earliest biological development of a fertilized human egg."

The sponsor for HB 865, Rep. Charles Van Zant, R-Keystone Heights, has put up similar legislation for the past seven years, but it's the first time it has been considered by a committee, thanks to Criminal Justice Subcommittee chair Rep. Carlos Trujillo, R-Miami.

“The bill recognizes that both the mother and the baby are citizens of the state of Florida," Van Zant tells the Herald. "...And we are therefore compelled to protect their lives."

Ironically, the bill asks the Supreme Court to overturn Roe v. Wade and Planned Parenthood of Southern Pennsylvania v. Casey. While Florida lawmakers were pondering the bill, the Supreme Court was busy Monday rejecting North Dakota's appeal to "enforce a law banning abortions when a fetal heartbeat is detected as early as six weeks into a pregnancy," according to the Associated Press.