Chief John Mina: Orlando Police ahead of other departments nationwide 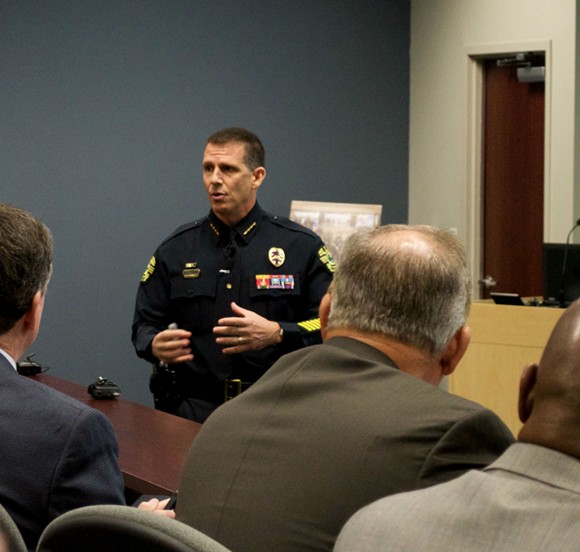 At the Orlando Police Department's year-end review, Chief John Mina says his department is light years ahead of other law enforcement agencies in Florida and across the country in regards to its police practices.

President Barack Obama's Task Force on 21st Century Policing released a report earlier in 2015, and Mina says OPD is doing about 90 percent of the recommendations given in the report. One thing OPD didn't have was a policy regarding how to respectfully treat transgender people. OPD adopted its own policy in November, becoming one of the few in Florida to have such a policy, Mina says.

"We have an outside agency, FDLE, that investigates our shootings and a mandatory body armor policy," Mina says. "These are thing we've done for many, many years."

According to the rest of Mina's presentation:

- Officers used some type of force in 515 incidents, down from 610 incidents in 2014, and there were five officer-involved shootings. Orlando Police officers were shot at on five separate occasions.

"The foundation of OPD is fighting crime," he says. "Because of that focus and the proactive and innovative approaches we're using, crime continues to decline in our community."

Beverlye Neal of the local NAACP says there was a lot of valuable information from Mina's presentation that will help educate the community. One issue in the community she particularly wanted to highlight was domestic violence.

"We find, especially with African-American women, that they are victimized," she says. "They feel trapped, they can't get out and most of them don't know what resources are out there.

Later today, OPD is announcing it will be the first Florida agency to participate in the White House's Police Data Initiative to increase increase transparency, community trust and accountability. The city, OPD and White House representatives will preview domestic violence and sexual assault data sets that will be part of an open data website the city is launching in March, data.cityoforlando.net.