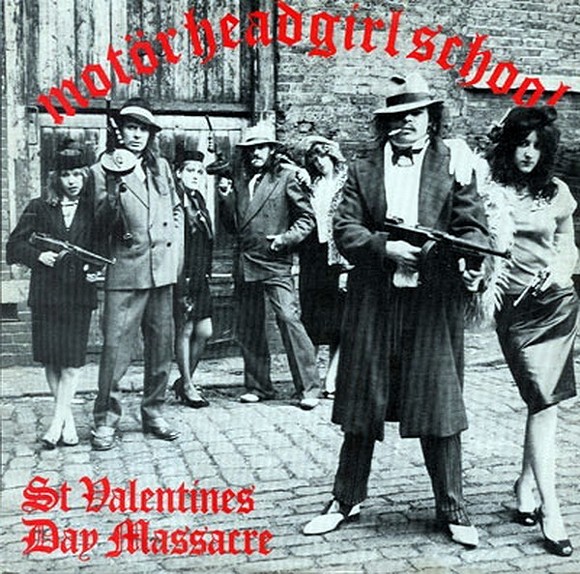 With the recent passing of Lemmy, the vast majority of memories ascribed to the man focused on either his ability to ingest prodigious amounts of mood-altering substances, his honest and open approach to straight talk, and, of course, his single-minded dedication to making Motörhead music. Lemmy was never a dabbler or an experimentalist, nor was he overly precious about the nature of his craft. He grew up adoring propulsive, rebellious rock 'n' roll simplified for pleasure and optimized for outsiders, so that's what he made nearly every day of his adult life.

I am, to say the least, an admirer of Lemmy. So please note that admiration when I posit this somewhat heretical idea: There exists a cover of a classic Motörhead song that eclipses the quality of the Motörhead original: Girlschool's cover of "Bomber," which was released this week in 1981.

Of course, there's a huge asterisk qualifying that heretical statement: When the groundbreaking all-woman metal band Girlschool covered "Bomber," it was hardly some unsanctioned attempt to steal some of Motörhead's thunder; in fact, it was released as part of a surprising and unique split EP, the **St. Valentine's Day Massacre**. The 10-inch single featured Motörhead and Girlschool (dubbed "Headgirl") collaborating on side one for a rough-and-tumble cover of '50s garage-rocker "Please Don't Touch." On the flip was Motörhead tackling Girlschool's hard-driving "Emergency" in a proto-thrash style. And then there was Girlschool doing the unthinkable, covering Motörhead's "Bomber" and not only surviving, but thriving.

In fact, although Lemmy is all over this record, this EP is much more of a showcase for Girlschool, a band that Lemmy deeply believed in, but also knew wouldn't get a fair shake in the NWOBHM climate of early '80s England. In fact, one of the core elements of the Motörhead sound – drummer Phil "Philthy Animal" Taylor – wasn't even on the record, replaced for these recordings by Girlschool's Denise Dufont, whose wild, thrash-and-bash style seems even more reckless than Taylor's in some moments.

Whether inspired and empowered by the platform they'd been given, or simply ready to go for broke, Girlschool's approach on all these recordings is forceful, explosive, and, well, showing no remorse. And although Motörhead's original "Bomber" is, obviously, a stone-cold classic, Girlschool laid down a version for this single that gives it a run for the money.