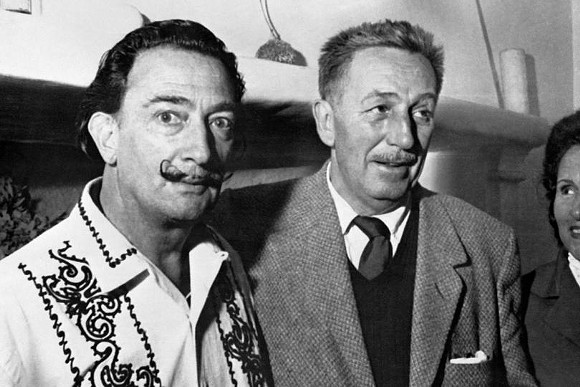 Florida today is what it is, in part, because of Walt Disney, and a new exhibit in St. Petersburg helps bring a unique and often overlooked part of Walt Disney to life; his friendship with legendary artist Salvador Dali.

The two worked together on a long forgotten animated short, Destino, which was uncovered in 1999 after sitting untouched and unfinished for over half a century. While the film was originally shelved, the friendship it caused between the two lasted through the rest of their lives. Disney filled his Palm Springs home with many of Dali's works and both wrote to each other on a regular basis. The two, along with their wives, even vacationed together on numerous occasions.

The new exhibit, "Dare to Dream," at the Dali Museum in St. Pete showcases many of the items from the friendship. Handwritten notes, storyboards from Destino and other personal items are featured in the exhibit. Other artworks that showcase Disney’s surrealist inspirations are also part of the exhibit; including pieces from Disney animators Mary Blair and Eyvind Earle.

In the spirit of Dali and Disney, the Dali Museum is using the exhibit as an opportunity to unveil a new imaginative approach to Dali’s works. The museum has translated Dali’s 1935 piece ‘Archeological Reminiscence of Millet’s ‘Angelus’ into a 360 virtual world that visitors can explore via Oculus Rift headsets. Known as ‘Dreams of Dali,’ the new virtual reality experience brings Dali’s dreamlike worlds into the 21st century. Along with the towers from the 1935 piece, other Dali objects are found in the virtual world including an image of Alice Cooper, whom Dali included in a 1973 hologram, a stone tunnel and the famous “Lobster Telephone.” The Emmy-nominated design firm Goodby, Silverstein and Partners designed the VR experience. All visitors to the Disney and Dali exhibit will have the opportunity to try the Dreams of Dali VR experience as well.

The traveling exhibit is in partnership between the Dali museum and the Walt Disney Family Museum in San Francisco with additional support from the Gala-Salvador Dalí Foundation in Figueres, Spain, and The Walt Disney Studios. It runs now through June 12, 2016.