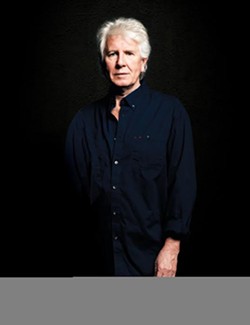 Graham Nash has been a busy guy over the past year. He toured with Crosby, Stills & Nash through May, and rather than taking a breather, he went back out on a solo tour of the states through August.
Then he went back to work on This Path Tonight, the solo album he will release in early April. Nash hit the road again in late January for another U.S. solo tour that will continue through February.
“I’m a musician,” Nash says, explaining in a recent phone interview why he has done so much touring recently. “I need to play. I need to communicate.”
That sort of thinking makes sense considering the fact that art – be it music, painting or photography – is such a central part of Nash’s daily life.
“I have to create something every day or else I get upset with myself,” he says. “I have to take a great photograph or make a great painting or write a good song or start a good song.”
By the time Nash started last summer’s solo tour, This Path Tonight – a strong collection of songs that leans toward melodic and thoughtful acoustic-based tunes – was essentially done. But he waited until 2016 to release it because he’d hoped to get Stephen Stills, David Crosby and Neil Young to play on some songs.
There was talk of a Crosby, Stills, Nash & Young tour in 2015. The year before, the group released an acclaimed box set, 1974, that documented the legendary tour of that summer, and Nash had been optimistic that they would regroup to tour in support of the set.
But any possibility of a tour went up in smoke in fall 2014 when controversy erupted between Crosby and Young. Following news that Young was divorcing his wife of 37 years, Pegi, and had started dating actress Daryl Hannah, Crosby spoke about Young’s situation in an interview with the Idaho Statesman newspaper. “I happen to know that he’s hanging out with somebody [Hannah] that’s a purely poisonous predator now,” Crosby told the publication. “And that’s karma. He’s gonna get hurt.”
Crosby apologized eight months later on The Howard Stern Show, but by all appearances, the damage was already done. Young declared that CSNY would never tour again.
For now, Nash has shows to play. He will have plenty of flexibility to change up his song set from night to night, but plans to cover everything from songs with his pre-CSN band – the popular British group the Hollies – right up to his newest songs. He says he enjoys doing his own shows.
“It’s great when David, Stephen and I are together. It’s great when David, Stephen, Neil and I are together. And it’s great when me and Crosby are together,” he says. “But I do enjoy the solo concerts. I don’t have to deal with anybody else’s music but mine.”