A 9-foot green anaconda was caught in Melbourne this week 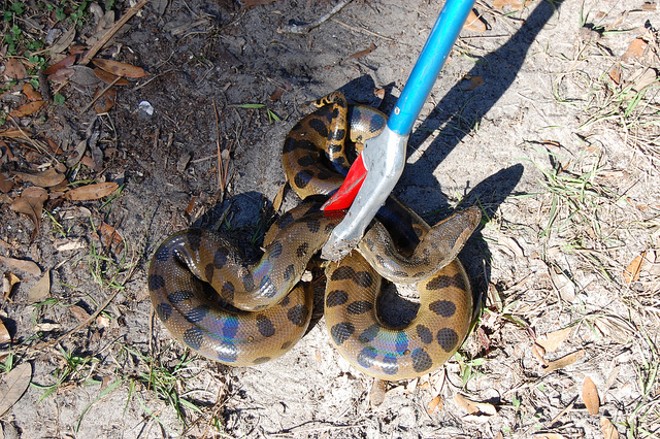 A massive anaconda was found in a Melbourne woman's backyard earlier this week, but it wasn't buns this snake was after, but two small dogs.

Leisa Remsberg let her two dogs, Gizmo and Teddy, outside Monday morning and found an unexpected nine-foot green anaconda, according to Florida Today.

After the snake snapped at her pets, Remsberg called 911. While she waited for authorities to arrive, her neighbor captured the snake using a shovel and put in in a sealed container.

The dogs are fine.

Brevard County Animal Services arrived to secure the snake, but later turned the situation over to the Florida Fish and Wildlife Conservation Commission, reports Florida Today.

FWC officers took the snake to a veterinarian and had it euthanized for research purposes.

Greg Workman, a spokesman for the FWC, told Florida Today that the snake did not have the legally required microchip that would be found in an escaped pet and that wildlife officers are still trying to determine where the snake came from.

Green anacondas can weigh more than 500 pounds and grow longer than 30 feet. They are native to South America, but have also been found in Florida. Last November, another nine-foot green anaconda was shot and killed near the St. John's River in Brevard County.