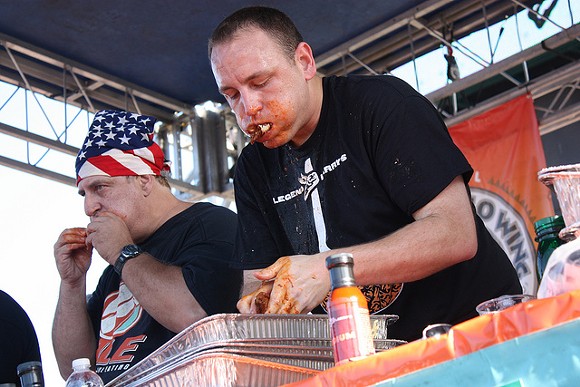 Food is made to be devoured, and never has this has been more true than with the line of competitive eaters set to take World Chili Eating Challenge tomorrow at the 2016 Orlando Chili Cook Off.

Joey "Jaws" Chestnut and Miki Sudo are two of the 10 signed up for said event, and their history with food is both insane and impressive. Chestnut is ranked second in the world and Sudo third (However, she is first in women).

Although their stomachs are significantly empty at the moment, Saturday will be a new day, one of face-stuffing glory. Preparation is key.

"For something like this, it's pure capacity," said Chestnut in regards to competitive chili eating. "It's just finding that perfect rhythm of swallowing and shoveling chili. [...] A six-minute contest is more of a sprint. I try and do the same thing over and over again."

Unlike with ribs or wings, which demand participants to develop a method to quickly eat around the bone, there is little technique to eating chili. The only systematic approach involved is tied to a rule that requires everyone to use a spoon rather than slurp straight from the bowl.

Other than that, it's simply a matter of seeing who can take in the most.

"There's this adrenaline going through you, but then there's this relief that you're finally done, and then you're anxious to see how you performed. It's a whole lot. Mainly I just feel a sigh of relief come over me," Sudo said. "Chili can be kind of heavy on the sodium, so that can get to me. It's really important to try and stay hydrated immediately afterwards."

The pot of meaty stew was spicier in previous years but has since become milder, a fact that Chestnut celebrates but Sudo laments. The pair have competed against each other before and will be facing off again since competitive eating doesn't separate participants by gender.

Despite this inclusion, Sudo is not intimidated that she's going up against men.

"The records have shown that being a particular gender or particular age or a particular size or weight or height, none of that guarantees your success in competitive eating," Sudo said. "It's really just drive and technique and how much effort you put forth."

The cook-off is bringing in world champions, but only Chestnut can claim that he's the Chili Eating King. The athlete swallowed a record-breaking 2.125 gallons in six minutes in last year's competition.

As for this year, he's holding onto a sense of optimism, as he's confidant that he can chomp past the record.

"It is kind of intimidating when you look at all the bowls lined up waiting to be eaten, but you have to go back to what you know you can do," Chestnut said. "Once you know you can eat two gallons of chili, there's no reason why you can't do it again."

These two eat more chili than most people eat in a lifetime, but they both still enjoy to take on a bowl on their off-time. Chestnut is head over heels for his mama's take on the meal while Sudo goes for the rather unconventional, chili-over-rice deal she discovered while living in Hawaii.

Make sure to check out the World Chili Eating Challenge tomorrow at 5:15 p.m. Tickets for the 2016 Orlando Chili Cook Off are available on the official website.