SeaWorld will no longer keep Commerson's dolphins in captivity 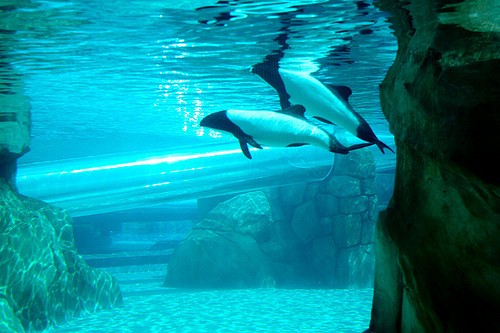 The most iconic animal of Aquatica may soon be no more. SeaWorld, Aquatica’s parent company, has confirmed that the famous Commerson’s Dolphins, which the Dolphins Plunge slide runs through, will not be replaced when they pass away.

The dolphin exhibit is one of the first things guests to the park see when they enter and they are heavily involved in the advertising for the park. SeaWorld’s population, captured by biologists in the early 1980s, has never really grown very large, with only 14 births that lived more than 1 month through 2001.

Commerson’s Dolphins typically live between 15 to 18 years, all of SeaWorld’s Commerson’s are at least 15 years old.

The population has been moved around some, some calling SeaWorld Ohio home. With SeaWorld Ohio closures the population was reunited in San Diego. Four were moved to Orlando for Aquatica’s opening in 2001. Earlier this year the remaining San Diego Commerson’s were moved here to Aquatica after spending a few years out of public view. The move proved too stressful for one of the older dolphins who died a week after the move.

The small amount of Commerson’s in captivity means there isn’t a large enough genetic difference to safely breed them. This mixed with SeaWorld’s commitment to not take animals from the wild means that the last remaining Commerson’s Dolphins in North America will likely die off in the next few years. The rare dolphins are known to be in captivity in Japan but importing them from there is a risky move that SeaWorld doesn’t want to undertake.

There is no word on what SeaWorld plans to replace the dolphins with at Aquatica.