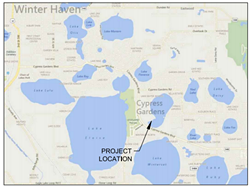 Even while Osceola County struggles to fill the countless empty buildings currently in their tourist district, county leaders are moving forward on a plan to rezone 3,396 acres of land from a general Mixed Use zoning to a Tourist Commercial zoning.

The property in question is bordered by Polk County on two sides and with various uses along the edges, including a rural enclave and a conservation area. The property is close to where the new $750 million Margaritaville development is being built. Also, the Bahama Bay by Wyndham Vacation Rentals boarders it to the north.

Osceola County has struggled since the recession when it saw many of the smaller, independent businesses along the once popular 192 strip close their doors. Many of those small, independent motels and businesses now rely not on tourist but long term stays by locals (i.e. homeless Cast Members) to survive.

The new zoning would allow for tourist-related housing (timeshares) to have up to 40 units per acre while traditional hotels could have up to 60 units per acre. That is rather small for most hotels, which usually average between 170 and 200 rooms on plots of 2 to 3 acres.

It's worth noting that the property is near the popular Reunion Resort. That 2,226-acre resort complex features over 1,500 hotel rooms and over 6,000 housing units with the vast majority being used as vacation rentals. Despite the sprawl-like features of the Reunion Resort, with its numerous golf courses, twisting streets and cul-de-sacs, Osceola County seems to think that this type of development will help enhance the county.

The application for the zoning change states:

“With the low current buildout densities already in place within Mixed Use District 9 [the land up for redevelopment], the larger percentage of wetlands that do not allow for proper connectivity including framework streets, and the approved densities and intensities within approved DRIs and PDs in this area the structure and density needed to implement an effective mixed use development is not currently present.”


The area does include some pre-existing development, including Westside K-8 school. It also includes numerous landowners, so a large scale Reunion-style project is unlikely. The county seems to believe a disjointed road network with at least 5 housing units per acre and various developments all in a single area with no major density is how to fix sprawl.

Of course, they also think that wider sidewalks, outdoor dining and more palm trees is what’s needed to bring back the tourist who now all seem to be staying up I-4 at Universal and on I-Drive.