AMFMS is a band based in Maryland but with Florida ties strong enough to warrant a record release here (Feb. 15, Will’s Pub). That’s probably because they’re fronted by Tampa son Shawn Kyle, a musician with a pretty well-established track record, from solid work like the beachy indie rock of Florida Kilos to somewhat more regrettable stuff like the stilted Beauvilles. This latest band goes in the plus column for him. Stylistically, their sonorous indie rock straddles ‘80s alternative and psych rock. Though the combination isn’t perhaps the first one to come to most minds, their particular take is a cohesive aesthetic with solid playing and sturdy songwriting. 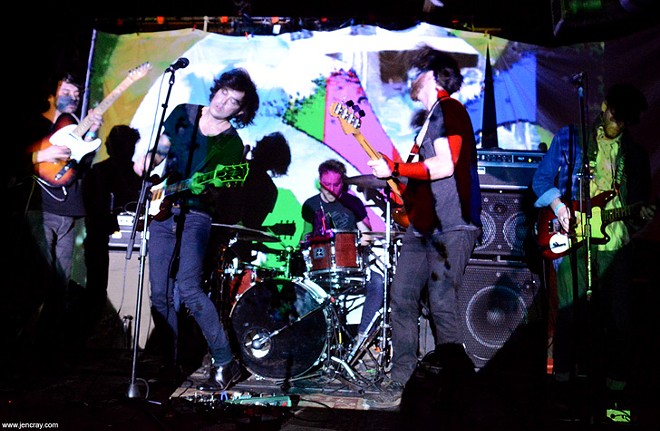 Opening the night was local Taryn Roberts, whom I was encountering for the first time. Backed by a full band comprised of members of Orlando band Timothy Eerie, he kicked out loud alt-rock with big chunky guitars, nice slacked-out melodies and occasional psychedelic washes. His songs sometimes feel a little developmental still, but there’s some real material here.

Speaking of Timothy Eerie, they also performed. I went to this show not expecting to write much about them since I did just four months back. But this was already a very different band than I saw not so long ago.

The young psych band went bigger and even more traditional this time out with at least a couple more members (swirling keys and another singer) and, oh boy, incense. They look to be doubling down on the genre and going more authentically psychedelic in a trajectory whose logical conclusion usually involves sitars. There’s nothing particularly wrong with that, especially when done well like it is here. But it is a lot more noodly, which, personally, is only a virtue when I’m eating. More essentially, though, it’s very literal, so much as to be retro. What was initially a band expanding psychedelic sounds with a bright, current edge is now becoming a straight revival act. For fans of previously local Strangers Family Band, however, Timothy Eerie’s your next score.

Perhaps you noticed the frequency with which the word “psychedelic” has turned up in this review. That’s because the entire night was draped in good acid visuals that made this intent emphatic and unambiguous. Visuals are always a dimensional show gesture that earns points, but especially so when it involves a two-man team live-mixing them like it was this night. Groovy, man: