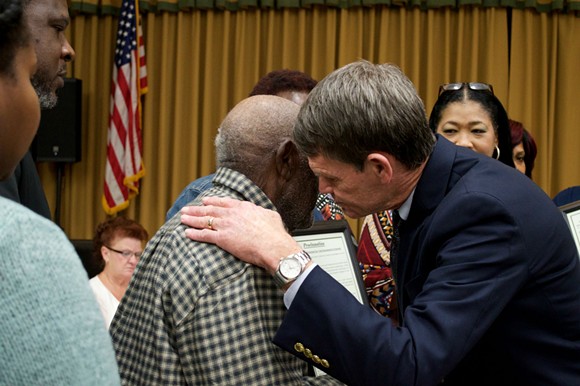 The city of Groveland reckoned with the 67-year-old skeleton in its closet Tuesday evening, in what could be interpreted as a small gesture, but is in fact, pretty monumental. Groveland Mayor Tim Loucks read a proclamation apologizing and encouraging Gov. Rick Scott and his Cabinet to exonerate the Groveland Four, four African American men accused of raping a white woman in 1949.

"For myself and for the city of Groveland, we do offer our sincere apologies," Loucks told relatives of the Groveland Four on Tuesday. "The biggest goal of the city of Groveland and south Lake County is to allow this to be healed. It's been ignored for 67 years. There comes a time when you can't ignore, should not ignore anything like this."

The lives of Charles Greenlee, Walter Irvin, Samuel Shepherd and Ernest Thomas were radically altered after 17-year-old Norma Padgett accused them of sexually assaulting her. Thomas was hunted and killed by a posse, and a white mob rampaged through Groveland's black community all before there was even a trial. The men were tortured in the basement under the Lake County jail by the Sheriff's Office. A juvenile at the time, Greenlee was sentenced to life in prison, but Shepherd and Irvin were sentenced to death. After the two men had their death penalty sentences overturned in 1951, Lake County Sheriff Willis McCall was put in charge of transporting them from Raiford State Prison back to the local jail. McCall, who would later claim the two handcuffed men attacked him, shot Irvin and Shepherd. Shepherd was killed instantly, and Irvin, who pretended to be dead, later told officials McCall staged an escape attempt to justify shooting them unprovoked. Irvin was later sentenced to life in prison, and both he and Greenlee were paroled in the 1960s.

The last of the Groveland Four to die was Greenlee, who passed away in 2012. McCall ruled over Lake County until 1972, when he was removed from office after he was charged with kicking a black prisoner to death and ultimately acquitted by an all-white jury. Gilbert King's 2012 book Devil in the Grove: Thurgood Marshall, the Groveland Boys and the Dawn of a New America revealed FBI records on the case that included a medical examination of Padgett saying she showed no signs of assault. Twice now, state Sen. Geraldine Thompson, D-Orlando, has filed a bill to exonerate the four men, and University of Florida student Josh Venkataraman started an online petition last year asking Gov. Rick Scott for the same thing.

Wade Greenlee remembers a time before the accusations when his older brother Charles Greenlee would pick him up, swing him across his back and jump in a creek. Wade, who was 6 in 1949, says his brother would tell him to hang tight and hold his breath. After Padgett accused his brother, nobody was there to swing him around anymore.

Like the Rosewood massacre and nearby Ocoee massacre, a culture of silence had pervaded Groveland surrounding the case, so the proclamation the city made is a huge step. Arguably, an apology from Groveland was overdue, but more so is an apology from county and state officials. After the city's proclamation, author Gilbert King told residents that officials from Lake County all the way up to the Florida governor and federal officials allowed the behavior seen in the Groveland case.

"I sort of always believed as I was doing the research that well, this is a really bad sheriff, Willis McCall, in this county and look at some of the violence he did," King says later. "As I did more and more research, I realized it wasn't just the act of a bad sheriff. It was elected officials who had his back and enabled him to get away with this time and time again."

When the families of the Groveland Four wrote to Gov. Rick Scott in 2012 demanding an apology and asking that Florida expunge the men's records, Scott's office passed the buck onto the State Attorney's Office, according to the Orlando Sentinel. And Scott isn't the only one ducking responsibility here. Florida legislators who actually represent Lake County could have filed their own bills similar to the one filed by Sen. Thompson. The Orlando Weekly reached out to Scott for a comment on the Groveland Four, but so far, his office has not responded.

"Here’s why this matters," writes Miami Herald columnist Leonard Pitts Jr. about exonerations for the Groveland Four. "Some people like to pretend the world sprang into existence yesterday. In an era of mass incarceration and epidemic police misbehavior, they earnestly wonder why African Americans often don’t trust law enforcement. Here, then, is an instructive reminder, past tapping present on the shoulder — justice denied for 66 years and counting."