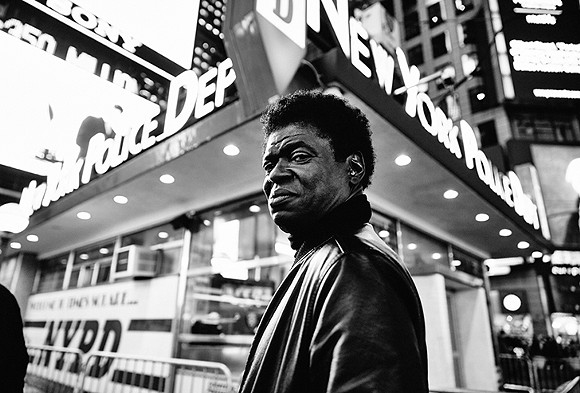 Soul music mixes agony and ecstasy better than any other American art form. And very few musicians have walked that line like Gainesville native Charles Bradley: homeless at age 14. Scraping together a meager living as an itinerant cook. Nearly dying from a misdiagnosed penicillin allergy. Seeing his brother murdered in a random robbery. Caring for and living with his elderly mother for 20 years. Chasing his musical dreams for twice as long without ever figuring out how to reach them.
That all changed in the early 2000s, when Daptone Records co-founder Gabriel Roth discovered Bradley performing as a James Brown impersonator. It took 10 years for Bradley and co-writer/producer Tom Brenneck to piece together a debut album, 2011’s No Time for Dreaming. But once it dropped, critics and audiences alike were blown away by the “Screaming Eagle of Soul’s” potent vocal punch, sensitive songwriting and devastatingly emotional performances.
Two years later, sophomore album Victim of Love boasted a more upbeat, confident tone, while sold-out tours around the world – and at Harlem’s Apollo Theater, where Bradley first saw James Brown in 1962 – earned him the top spot on Paste magazine’s Best Live Acts of 2015. But Bradley’s forthcoming album, Changes, might just be his best yet: the title track, a cover of Black Sabbath’s 1972 ballad accompanied by a stunningly simple video, packs the pent-up intensity of a man downtrodden for decades but finally triumphing.
“If I travel around the world and open my heart and give my love, people say, ‘Charles, thank you for helping me,’” he told Vice in 2014. “‘Hearing your music and how you [came] out with it, I know there’s hope too.’ That [makes] me feel like I gave something good to the world.”