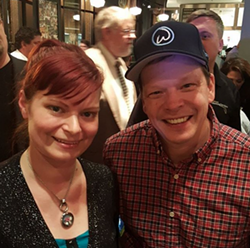 This isn't the first time this week a big-time chef has announced a partnership with a local Orlando maker — Jillycakes owner/head baker Jillian Kopke unveiled her sweet partnership with newly opened Wahlburgers at the VIP party last Thursday.

Owner-operator Mike Buell (of Davgar Holdings, LLC, who is developing the Wahlburgers brand in Florida) came into Kopke's store on Orlando Avenue in Winter Park and asked if she would like to partner with them to provide the desserts for the new downtown location. This isn't abnormal for the burger chain — a local cupcakery in Massachusetts has provided the sweets for the MA locations for years.

"We are currently in the process of working out which size and flavor of cupcakes will be best for this Orlando location in the long term, so we have just been sending along varied assortments to see what people like best," says Kopke. She has also suggested stocking at least one flavor of gluten-free cupcake at the Wahlburgers location.

"I grew up in Plymouth, Massachusetts, which is just south of Boston, so it's been great to share some of that hometown pride with our Orlando family," says Kopke.