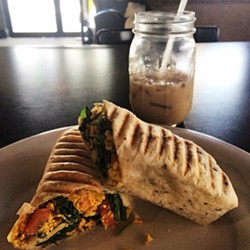 Remember Foursquare — the social media platform that made "checking in" to a place an actual thing? In some form or another, it's still alive and kicking, but their curation algorithm leaves something to be desired. The social network recently released its list of the 13 Best Breakfast Sandwiches in Orlando, and while many of the spots they tout are dead-on, a couple have us scratching our heads. Take a look at the full list here, and then compare to our list of nails/fails below:

Bakery Plus — Truly, as one of the commenters said, one of Orlando's hidden gems. Also true: cash only. Go to the bank before hitting up this Michigan Street counter for a baconeggandcheese (one word) on a fresh bagel.

Zaza New Cuban Diner — First off, praise be to Zaza for giving us a little better option in Terminal B at MCO than the mile-long line at Starbucks. Second, these breakfast sandwiches are tops. Fresh Cuban bread, real egg, melted Swiss cheese and ham. Nada mas.

Se7en Bites — I don't know how many versions of biscuits and pimiento cheese gravy there can be, but I'll eat them all. Good idea: Park two blocks away and walk. You'll want the meandering digestion time afterward.

903 Mills Market — The Robin's Egg sandwich is our pick for standout sandwich on the menu. It's basically a BLT on a schmeared bagel, plus a fried egg. So much yes. Also, if you are gonna eat breakfast outside in this town, this is the place. Take a walk around Lake Davis post-sandwich.

This is best summed up: Obviously the Foursquare formula doesn't eliminate different locations of the same chain. It's a bummer that more than one-third of the list is populated by Starbucks (three times) and Panera Bread (twice). There are many more nosh-worthy breakfast sandwich spots in this town worth visiting — Drunken Monkey's breakfast burritos can't be beat, and the new breakfast sandwich on the specials menu at Briarpatch is full of flavor (sriracha aioli and pickled piquillo peppers ftw).