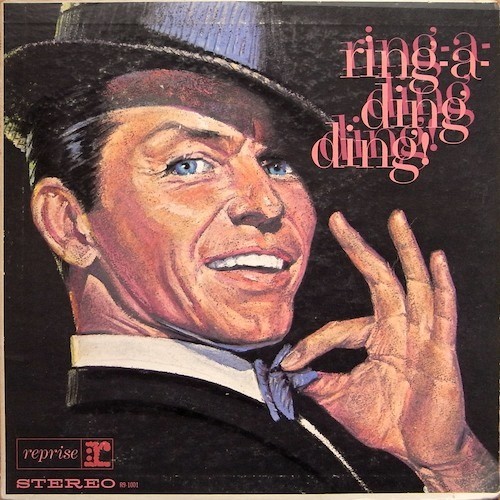 Frank Sinatra being Frank Sinatra, the end of the 1950s found him restless and irascible. Not because he was struggling to find an audience or because his art was suffering. In fact, the exact opposite was true. The decade was by far his most successful, both creatively and commercially. After signing a contract with Capitol Records in 1953 – when he was most definitely at a creative and commercial nadir – Sinatra had masterfully threaded the previously unidentified needle of "pop star with substance." A string of chart-topping singles were complemented by an equally impressive run of concept albums (including a contemporary classical work of tone poems!) that made it clear he was as comfortable singing about skinny dames ("Lean Baby") as he was tackling (and defining) the Great American Songbook. And the record-buying and concert-going public ate all of it up, making him the most popular – and most revered – performer of the decade.

But, Frank Sinatra being Frank Sinatra, he soon came to see his relationship with Capitol as less than equitable. He constantly feuded with label head Alan Livingston – who not only signed Sinatra to the label, but also had the foresight to pair him with Nelson Riddle – both about creative directions and contract details. (Worth noting: Livingston also famously turned down the Beatles three times and invented Bozo the Clown.) So, by the end of the decade, he was looking to move past his relationship with the label that had made him an iconic superstar. He first attempted to buy Verve Records from founder Norman Granz, but was unable to make it happen. So, Frank Sinatra being Frank Sinatra, he started his own damn label.

Reprise Records was formally founded by Sinatra in 1960, and was built on the then-radical notion that recording artists should not only have creative control over their art, but that they should also eventually come to own the work that they recorded while under contract to the label. It was, essentially, the first major indie label. And, Frank Sinatra being Frank Sinatra, his first release on his brand-new label was equal parts barn-burner and statement of intent.

Ring-a-Ding-Ding! was released in March 1961 after a three-day recording session with arranger Johnny Mandel in December 1960. It broke sharply with the concept-heavy Capitol albums of the '50s, as its only unifiying theme was its reliance on driving, brassy, upbeat numbers (it's said the only concept was "no ballads"). Of course, Sinatra kept his eye on the Songbook, featuring three Irving Berlin songs, two Cole Porters, and one each by the Gershwins, Jerome Kern, and Harold Arlen. But he also trotted out a clutch of less-known and more personal numbers: the title track was custom-built for Sinatra by Jimmy Van Heusen and Sammy Cahn and the daffy but lovely "Coffee Song" was first recorded by Sinatra back in the '40s, and given an appropriately caffienated – and mature – new take here.

It may seem somewhat counterintuitive for an artist to proclaim his creative independence by making one of his most breezy and accessible albums to date, but, you know, Frank Sinatra being Frank Sinatra, this album was a perfect personification of his approach to the new decade, and one he could not have made for Capitol. Having basically conquered the world, he now wanted to enjoy his conquest, and for the first half of the 1960s, he did just that. The gleeful and gassed Sinatra on this album would – along with his Rat Pack – go on to define a certain cosmopolitan adulthood for the decade. With their combination of (then-) moderate politics immoderate debauchery, Sinatra and his crew were the Greatest Generation writ large, standing tall, proud, and tipsy atop a foundation of prosperity and ease, unaware of the foundational cracks that were about to give way to a revolution.