As Leopoldo Palacios, a world-renowned designer of show-jumping courses, led us around the ring last weekend at the Live Oak Plantation in Ocala pointing out the sequence of jumps and some of the more challenging obstacles, I was struck by how a thousand-pound horse could effortlessly soar above these well-thought-out and colorful cylindrical bars. Palacios spoke of strides and takeoff positions, but I just gazed at the rails, lost in some sort of equine reverie. Only the unmistakable stench of manure, surging upward from what I thought were the soles of my Alessandro Dell'Acqua sneakers, roused me back. A quick check disproved my suspicions, but underscored the importance of sensible footwear when attending an international show-jumping competition – in this case the Live Oak International, a sanctioned event of the Longines FEI World Cup.

Horse jumping's reputation as an elitist sport isn't exactly unwarranted. From horses that easily draw six-figure sums to high-end sponsorship agreements with Porsche, Lugano Diamonds and Swiss watchmaker Longines, the pronounced whiffs of money are everywhere. The 5,000-acre Live Oak Plantation, in fact, is owned by Charlotte Weber, an heiress to the Campbell Soup Company fortune. Her niece, 19-year-old Chloe Reid, was one of the riders in the competition and finished second (Pan American Games double gold-medalist Marilyn Little won the competition along with the $25,000 first-place prize).

But while some spectators can be well-heeled, Italian footwear is certainly not a requirement. What you'll find behind the gilded veneer are some of most down-to-earth folks you'll meet. "Horse people are the best people," is a refrain I often hear from my wife (a horse person), but beyond the people is the sport itself.

To say watching a rider negotiate a beast 10 times his or her weight over 2-meter-high obstacles is extraordinary would be an understatement. The thunderous syncopation of horse hooves is simply an awesome sound to hear. At the end of the competition, after the prizes were doled out, the top finishers galloped around a few of us who were allowed on the course to take photos. In an effort to get the perfect shot, I got a little too close to one of the galloping horses – a 15-year-old bay gelding – and its flared nostrils let out a rush of air I felt on my face. That exhalation, and the wry smile shot at me by fourth-place rider Andrew Kocher, I won't soon forget.

The top seven finishers, Kocher included, advance to the Longines World Cup Jumping Finals in Göteborg, Sweden on March 28. If you can't make it, mark March 8-12, 2017, on your calendar when next year's edition of the Live Oak International takes place. Witnessing power, grace and beauty is always impressive, no matter one's tax bracket. 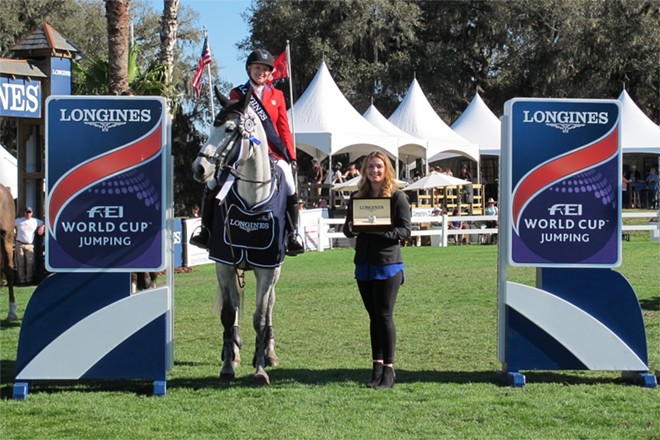