‘Spy’ magazine is back in (conversational) circulation 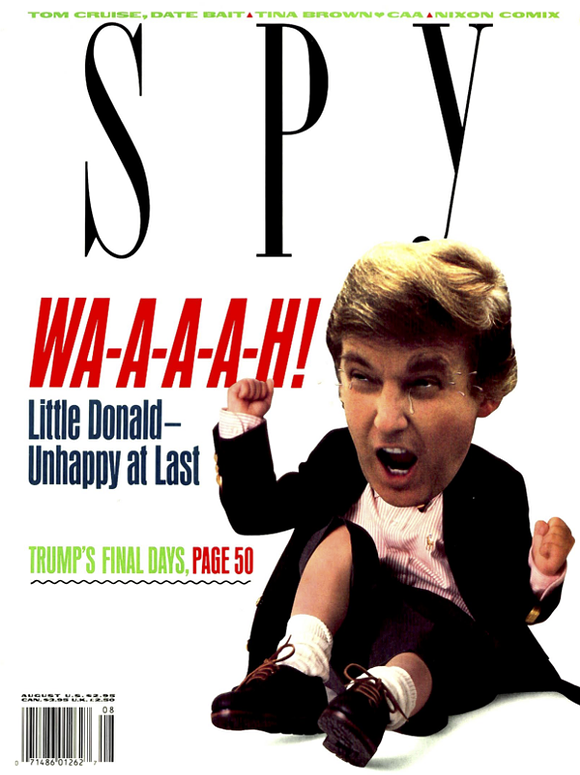 If you've wondered why some 40-somethings of your acquaintance have been referring to Donald Trump as a "short-fingered vulgarian" or "America's Cheapest Zillionaire" since the beginning of his circus of a campaign, NPR finally let everyone else in on the joke Monday with their interview of Graydon Carter and Kurt Anderson, editors of the legendary Spy magazine, which first pinned the digit-length-challenged descriptor at Trump.

In our wildest dreams we never imagined Spy would be part of the 2016 presidential campaign, but then we never imagined Trump making it this far either. And when the hand-size/dick-size insult-slinging actually made it into the debates, clearly it was time to resurrect the source of the "short-fingered" epithet. Here is (I think) the first instance, from March 1988, but the moniker lingered for years.

Launched in 1986, Spy broke new ground as a smart humor magazine with real journalistic chops and writing talent on par with the New Yorker. Imagine Tom Wolfe's New York in the Bonfire of the Vanities era — Spy was covering the real thing in all its gilded excess. Their snarky coverage of puffed-up celebs and rich socialites often took the form of pranks, as in their "America's Cheapest Zillionaire" series, in which they sent checks for absurdly low sums to rich people, continuing to decrease the amount to see how long it took for the moneybags to decide it wasn't worth the effort to cash the checks. (When Trump cashed a 13-cent check, they gave up and named him America's Cheapest Zillionaire.)

Spy folded in 1998, but – proving that the Internet is good for something – the entire run of the magazine has been digitized and is available and searchable in Google Books, so knock yourself out — if you don't have piles of faintly musty back issues (like us) or multiple copies of Spy: The Funny Years, published in 2006 (like us), you can still get your fill online.