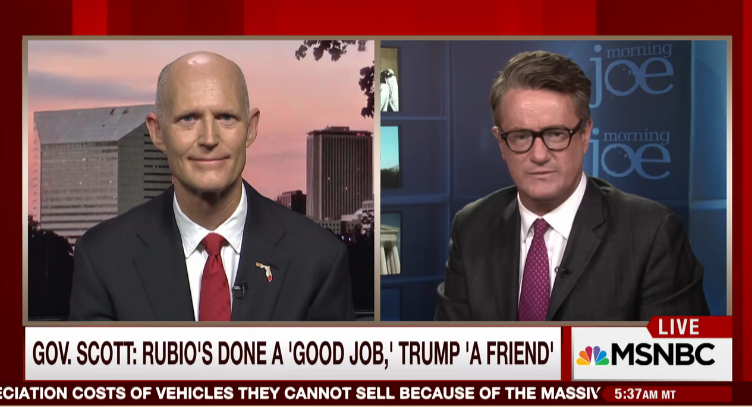 This morning, Gov. Rick Scott was a guest on MSNBC show Morning Joe. Hosts Mika Brzezinski and Joe Scarborough tried to get the governor to tell them who he favors in the Republican presidential race, but Scott (who gushed over Donald Trump in a fawning op-ed published in USA Today in January) said he wouldn't back anyone before the Florida primary.

When Scarborough asked Scott whether he'd ask his pal Trump to back down with the anti-Muslim rhetoric, Scott didn't answer.

Scarborough pressed him, asking, "Do you think Muslims hate Americans, that Islam hates America, as Donald Trump said last night?" After an uncomfortable pause, Scott responded by attempting to talk about jobs, and he tried to let Scarborough know that "in our state, we're headed in the right direction."

Scarborough cut him off, saying: "No, no, no. I want to know what’s going on in your head, governor. We’re friends. I want you to answer the question: Do you personally think that Islam is a religion that hates America?"

Once again, Scott attempted to evade the question with general statements about Florida being a "melting pot." At which point, Brezesinski finally cut him off and told him to answer the question or "scoot."

Scott scooted – rather, he was booted – off the air and the segment ended. Afterward, Brzezinski said his performance was "weak, sniveling political wavering."

“He chose not to answer," she said. "He chose to be weak. And so we had him leave the show.”

Could this possibly be the most Rick Scott thing that has ever happened? We think so. Watch the segment below.