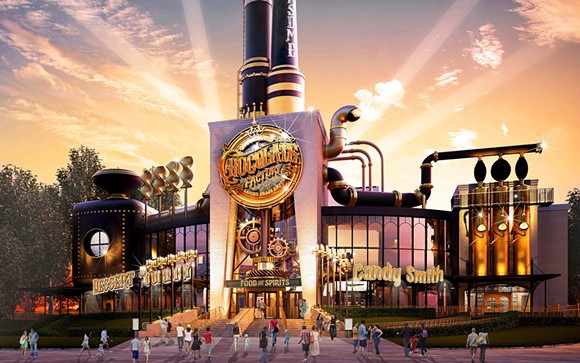 According to Universal, the Toothsome Chocolate Factory & Savory Feast Emporium will not only carry the longest name of any dining establishment in Orlando, but will also carry "an array of gourmet-level chocolates and desserts – all in a highly themed, unique environment."


Welcome to the 19th-century inspired steampunk-era chocolate factory, complete with towering smokestacks, tanks and antique piping. Inside, a mix of brass, dark wood and gadgetry – along with staff who will look and act the part – will complete the steampunk feel.

Universal says the new full-service restaurant will be located near the entrance of Islands of Adventure, which places it in the former NBA City location.

The restaurant will revolve around a large selection of desserts, like an "artisan milkshake collection" and gourmet sundaes. The menu will also include non-dessert entrees, including steak, seafood and pasta dishes, gourmet burgers, sandwiches, salads and more.

You can find out more about the Chocolate Factory and its menu offerings here.