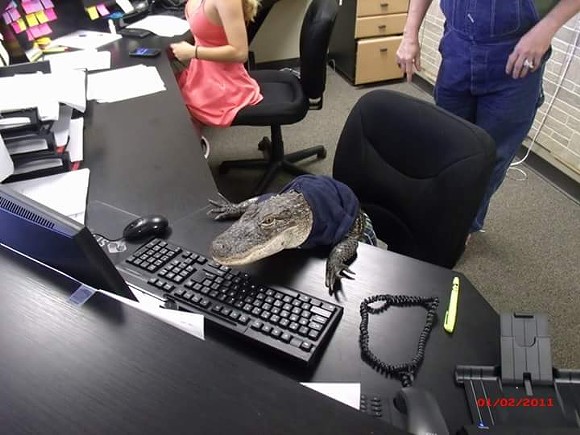 Mary Thorn cradles and kisses her pet alligator Rambo like a baby, dresses him in costumes and lets him ride on a motorcycle. The two have developed a bond over 11 years of performing together, but a state agency may force the Lakeland woman to give up her gator.

"I don't know how I'd react if I had to give him up," Thorn says about her gator to WFTS Tampa Bay. "I wouldn't want to go on...I sat there and watched my son die of cancer, and he's the only thing that I have left."

WFTS reports Rambo was a foot and a half when Thorn rescued him a dark closet where he lived with four other alligators, but now he's six feet long, and the Florida Fish and Wildlife Conservation Commission requires a captured alligator like Rambo to live on 2.5 acres of land. Thorn doesn't have that land and says Rambo is an indoor gator because of a skin condition he developed after living "in terrible conditions with no natural sunlight for years," making him sensitive to light.

"People don't understand," Thorn tells WFTS. "I didn't take him out of the lake. I gave him a home. He's my best friend."

FWC officials are investigating the case, but have not commented on it further, according to the TV station. Supporters have started a petition to help Thorn keep Rambo, which currently has 372 signatures.