Early this morning, SeaWorld announced an immediate end to the orca breeding programs at all of their parks, declaring that the corporation’s current generation of killer whales would be its last.

SeaWorld’s existing population of 29 orcas across three theme parks will be allowed to live out their lives in their current environments, but will not be replaced as they pass away. In the meantime, the current theatrical orca shows like “One Ocean” and “Shamu Rocks” will be retired, and the staged tricks will replaced with “inspiring, natural orca encounters” that “will focus on orca enrichment, exercise and overall health.” While the breeding program has already ended, the new educational orca presentations won’t roll out in San Diego until next year, and may not arrive in Orlando until 2019.

In the years since trainer Dawn Brancheau’s death and the release of the critical documentary Blackfish, SeaWorld has defended its practices against attacks from organizations like PETA and the Humane Society of the United States (HSUS). With today’s announcement, SeaWorld has also formed a partnership with HSUS, transforming their former adversary into an ally for environmental preservation and promoting animal welfare. “SeaWorld’s commitment to end breeding of orcas is a long-held goal of many animal advocacy organizations, and we commend the company for making this game-changing commitment,” said Wayne Pacelle, president and CEO of the U.S. Humane Society. “Today we turn a corner, working together to achieve solutions on a wide set of animal issues including sunsetting the use of orcas at existing facilities; maximizing SeaWorld’s focus on rescue, rehabilitation and advocacy for marine mammals in the wild; and sourcing food for animals and customers from humane and sustainable sources, including cage-free eggs and crate-free pork.”

Finally, SeaWorld has committed to spending $50 million over the next five years to be the world’s leading marine animal rescue organization. The money will also go to advocate for an end to the commercial killing of whales and seals, and an end to shark finning. 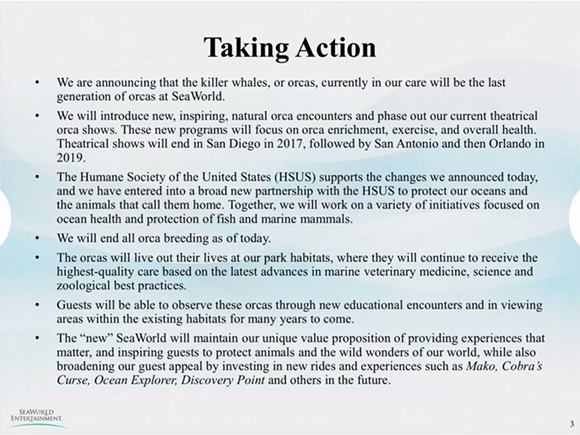 While marine mammal lovers are celebrating on social media today, it’s worth noting that SeaWorld’s shift is a calculated pivot that doesn’t provide everything their critics were demanding. For starters, given the lifespan of orcas and the fact that one is currently pregnant, SeaWorld CEO Joel Manby admits that killer whales “will be under our care for decades,” and that members of the current population could still be on display “20, 30, 40, 50 years from now.”

While Manby said during a conference call with media and investors that he “struggled with this decision more than any other decision I’ve made in business,” the radical shift was driven largely by surveys showing how impactful the orca issue is with the millennial generation. “Unfortunately a narrative formed in America, and we need to remove that cloud,” said Manby in reference to the controversy. “It was a blocker for us being able to tell our positive story.” He explicitly compared SeaWorld’s situation to Feld Entertainment’s removal of elephants from the Ringling Bros. circus, saying, “I can’t tell you how much this orca issue has clouded us from being able to focus on the day-to-day business. I talked to Ken Feld, and he said when he made his announcement on elephants, the entire organization went from fighting, heels in the sand, to ‘now let’s talk about the future, what are we going to create?’” 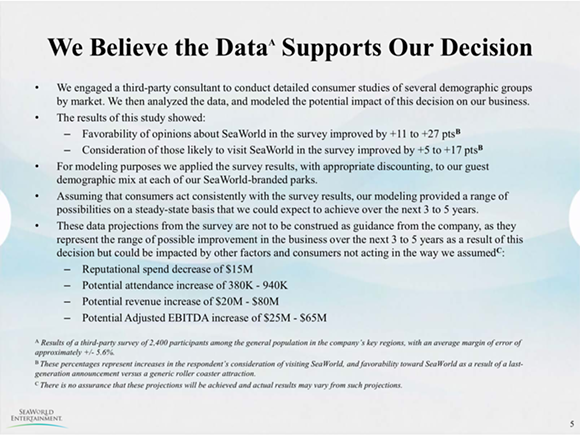 Before you go thinking this change is motivated by morality, look at the money SeaWorld projects it will make off this move. According to the company’s estimates, they will spend $15 million less on “reputation” (aka advertising to convince people you aren’t evil) while taking in between $20 million and $80 million more from visitors who were previously turned off by the orcas’ treatment. 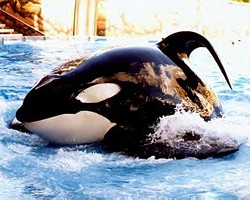 Ironically, this news comes days after SeaWorld confirmed that Tilikum, the orca involved in the deaths Brancheau and two others, has a severe lung infection and is unlikely to recover. Change may come too late for Tilly, but a generation from now the only kind of Shamu kids will know will be stuffed.