When leading local avant-garde musician and UCF music professor Thad Anderson launched the proud and consistently groundbreaking In-Between Series at the Gallery at Avalon Island just over a year ago, it was with a corps of drummers and a rhythmic concept. His latest performance (Mar. 14), by contrast, was a solo one, but with a much grander socio-urban concept.

For it, Anderson rode the entire stretch of the commuter train, recorded audio of the journey on an omni-directional mic and used it to map a sonic odyssey. Structurally, he used the discrete legs of the trip to define and demarcate the compositional movements, with a television screen narrating the corresponding physical place of any given moment. Though the field recording maintained its real-time roll without pause, Anderson played only when the train was moving to underscore the motion of the premise. 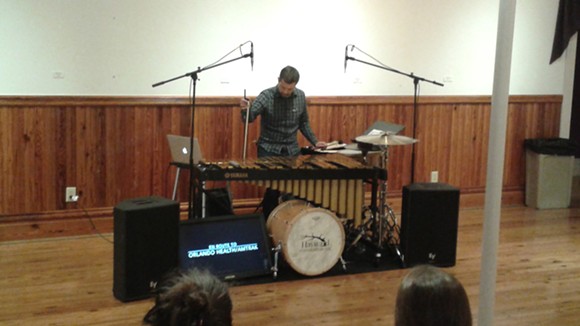 The ambient social noise captured on the train – the work’s very foundation – was thankfully well-populated by children, who lent the recordings most of their reality and personality. On top of that beautifully ephemeral skeleton was the body of some processed audio and minimal musical playback. But the clear heart of the performance was Anderson’s live improvisational playing, which progressed from the atmospherism of bow-stroked bells to dream-weaving mallet work to tense drum work and back.


With art that’s completely specific to and inspired by our native context, it doesn’t get any more local than this. Though there are plans to eventually make a digital album of Northbound, this captivating exposition was its live debut. And between the layers and interplay of sound and concept, this latest Anderson tapestry was a rich work of place, movement and multi-dimensionality.

Our mass transit efforts are still undergoing the sometimes embarrassing growing pains of an upward mid-size city still trying to catch up with itself (try staying clear of the railroad tracks, people). But projects like this are big-city art, and cosmopolitan credit goes to people like Thad Anderson and Pat Greene for leading the way forward.