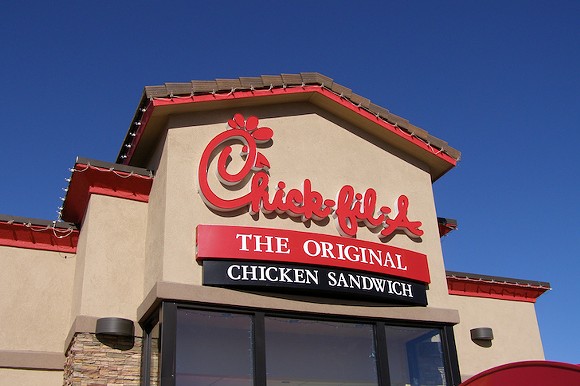 Chick-fil-A recently shook things up with its menu, and Orlandoans were one of the first markets to test out the new grub. The salad was tested in both Orlando and Houston before it went nationwide earlier this week.

Chick-fil-A's Spicy Southwest salad is a mountain of romaine lettuce topped with spicy chicken, Monterey jack and cheddar cheeses, grape tomatoes, roasted corn, black beans and tortilla strips, all for around $5, and it's set to replace the Asian salad on the menu.

According to Business Insider, this new food item is unique because it's the only salad on their menu that includes spicy chicken. David Farmer, head of Chick-fil-A menu development, told Business Insider that the restaurant chain has also released two new dressings to pair with the Spicy Southwest salad, a creamy salsa and a chili lime vinaigrette.

The salad has been available to Orlando residents for the past few weeks at various Chick-fil-As. Right now, you can get your hands on it at the Chick-fil-A stores at 700 S. Orlando Ave. and 2448 E. Colonial Drive.

Of course, you may not be ready to forgive Chick-fil-A for their past stance against marriage equality. In that case, may we recommend the Strand? There's no Spicy Southwest Salad, but their buttermilk fried chicken sandwich is a killer, plus it's a local business with none of the residue of past anti-LGBT moves.