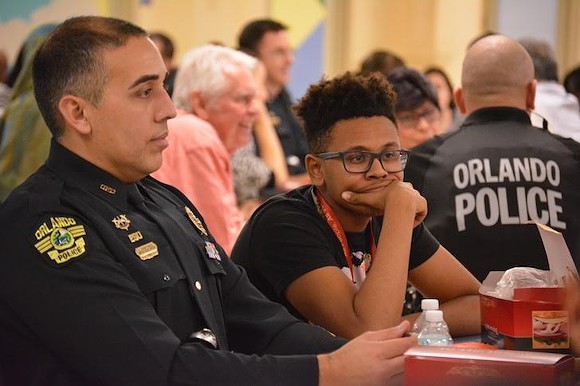 In the course of reporting the story about Samuel Sinyangwe, an Orlando data scientist with Campaign Zero who helped create Mapping Police Violence, we also talked to Orlando Police Chief John Mina about Orlando Speaks.

If you haven’t heard of Orlando Speaks, it’s an interactive community dialogue between residents and police officers that’s been held three times so far. Although local activists who attended the first event believed the event didn’t go far enough, Mina says for his officers, Orlando Speaks has been “enlightening.”

“When I was participating, there was a woman telling us about how she was pulled over going to work and how that made her feel,” he says. “I could picture her in that situation. In my own experiences as a young police officers in certain neighborhoods, I would wave to kids, and their parents would pull them away, telling them not to wave at police. It kind of makes you feel bad that parents would do that.”

Lorie Fridell, an associate professor at the University of South Florida’s criminology department, is also the co-developer of the Fair and Impartial Policing training program. Fridell speaks to police officers across the country about recognizing their own implicit bias. In this way, it’s mission is similar to the goals Orlando Speaks is trying to achieve.

“In society, generally, when we’re talking about police bias, we only focus on explicit bias and we ignore implicit bias,” she says. “A person with explicit bias is the kind of person we think of when we talk about discriminatory behavior. Implicit bias still links groups to stereotypes, but it’s not based on animus or hostility. However, these stereotypes can still influence behavior, even from individuals who reject racism."

She adds that police officers can be defensive when the training first starts, but later end up giving the program strong reviews.

“The way we’ve talked about police violence in this country, we treat officers as if they all have explicit bias,” she says. “We distinguish ourselves from traditional racial profiling training because that trains police officers on overt deliberate biases and probably most officers aren’t like that. That training treated officers as racists, and yes, some are racist, but there’s also well-meaning people who have implicit biases.”

Fridell says the demand for this training increased in early 2014 and escalated after 18-year-old Michael Brown was shot and killed by a police officer in Ferguson, Missouri.

“I consider Ferguson a flashpoint that reinvigorated a long-term discussion on police force and race,” she says. “It’s been particularly painful for a lot of cops that want to do the right thing, but it’s an incredibly needed discussion about what can we do to connect with communities and remove bias from policing.”

Check back here for the next Orlando Speaks event.