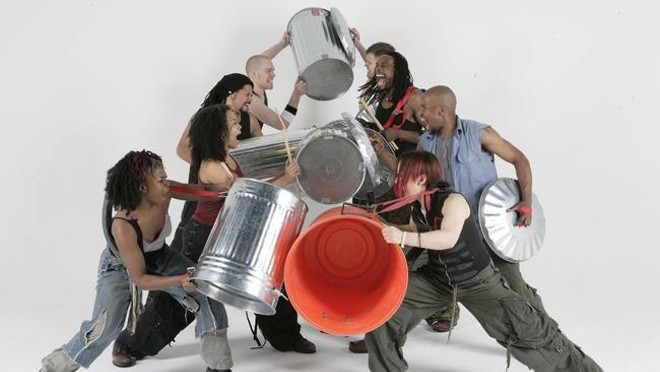 After circling the globe nonstop since 1991, you’d expect STOMP to be exhausted by now, or at least out of metal lids to smash. The found-object percussion show they spawned has certainly been imitated and exploited by enough theme parks and cruise ships to obscure the originality that brought the Brighton-based phenomenon fame in the first place. But even after seeing the show several times over the past quarter-century, spending 105 minutes in the Dr. Phillips Center with STOMP’s current touring company demonstrates that as the show has aged, it hasn’t lost any of its infectious, explosive energy.

STOMP has held up remarkably well, thanks to the performers’ propulsive exuberance, though the original design’s grunge aesthetic now looks more like homeless hipsters. There’s no dialogue, much less plot or storyline, but the cast is able to convey personality quirks and conflicts without words, giving the show a much-needed hint of character development. Pacing is snappy throughout the first 90 minutes, with one segment steamrolling into the next, though the show peaks with a high-swinging aerial act, then loses energy and lopes across the finish line.

What impressed me most after all these years was how funny STOMP was, exploring a wide range of nonverbal comedy from subtle sight gags to goofy toilet humor. Timing is everything in comedy and percussion, and this production is right on the beat in both departments.