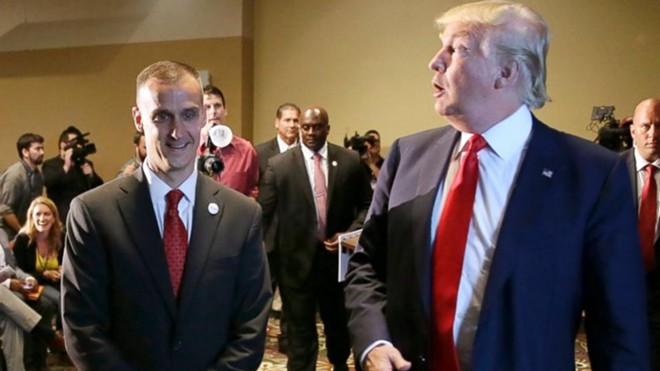 The charge is connected to an incident that occurred at a Trump campaign event in Jupiter, Florida, on March 8, according to The Atlantic.

Breitbart reporter Michelle Fields filed a police report against Lewandowski after he grabbed her left arm and reportedly almost pulled her to the ground as she tried to ask Trump a question.

NBC News reports that Lewandowski surrendered to Jupiter police Tuesday morning to face a misdemeanor charge of battery and images of the report have been circulating Twitter.


According to the report, Fields showed police her left forearm, which "appeared to show a grabbing-type injury."

The Trump campaign has released a statement about the charges to his manager, saying that Lewandowski is "absolutely innocent of this charge," according to NBC News.

"He will enter a plea of not guilty and looks forward to his day in court," the Trump campaign says. "He is completely confident that he will be exonerated."

Lewandowski has continually denied touching Fields, even calling her "delusional," but there are severally pieces of strong evidence to the contrary.

@MichelleFields you are totally delusional. I never touched you. As a matter of fact, I have never even met you.


Washington Post reporter Ben Terris witnessed the assault and wrote about it and Fields herself tweeted a photo of her injuries.

But the most damming evidence is new surveillance footage released by Jupiter Police showing Lewandowski grabbing Fields and yanking her away.

Lewandowski is scheduled to appear before a judge on May 4.