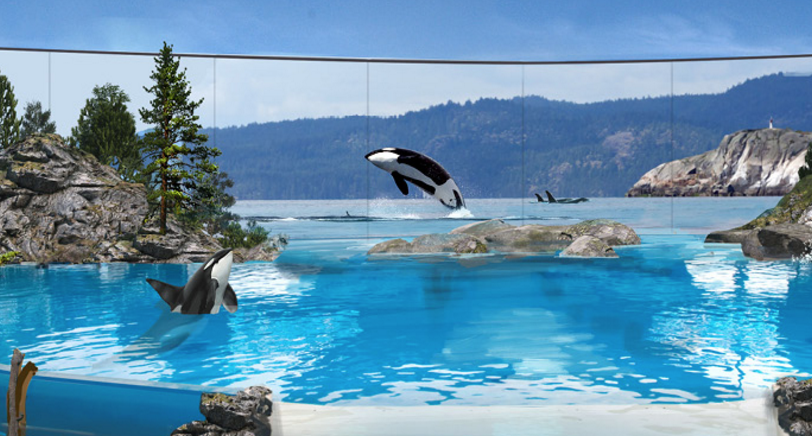 With the dust settling on SeaWorld’s shocking news that they’re ending the active orca breeding program in their parks, new questions have arisen concerning what kind of lifestyle this last generation will have.

In the official announcement, a rendering of an updated orca habitat was included, but that gives us few details of what the post-Shamu show orca exhibits will entail. Based on reliable yet unofficial sources, we can start to build an idea of what these orcas will do all day now that they won’t be dancing and having trainers ride them around.

The formerly announced Blue World Project, a massive expansion of the current tanks that included a water "treadmill" for the whales along with large underwater viewing areas, is now canceled. Instead, the current tanks will be remodeled first in San Diego, then in San Antonio, and finally Orlando. The shows have ended, but educational trainer interactions will be scheduled throughout the day using the current stadiums. These new interaction "shows" will be shorter and more educational than the current theatrical shows, but at least for the time being, the large stadium looks to be staying.

The remodeled tanks will include more natural-looking rocks and shoreline vegetation. The recently released rendering of the San Diego tanks shows what looks to be a large LED screen that will simulate natural settings and be used during the interaction times.

A likely rumor includes the introduction of live fish into the orca tanks allowing for the killer whales to better simulate hunting for food as they would in the wild. Fish have been introduced before but it spooked one of the whales, causing her to not enter the main tank for days afterwards. The fish were quickly removed from the tanks during that test. Orcas have co-existed with animals in the same tank at other marine parks: The Miami Seaquarium has housed their orca, Lolita, with dolphins and a pilot whale before. One option for SeaWorld as the orcas age and the pods dwindle in size is to introduce other animals into the exhibit.

The water treadmill that was such a popular part of the Blue World Project doesn’t seem likely in the near future, as none of the current tanks would be ideal to retrofit the treadmill into.

Outside of these details, little is known on the future of SeaWorld's orcas and their habitat. There is also no word on whether SeaWorld plans to keep the orcas at each of their parks separate or if they eventually plan to consolidate the orcas into one park.