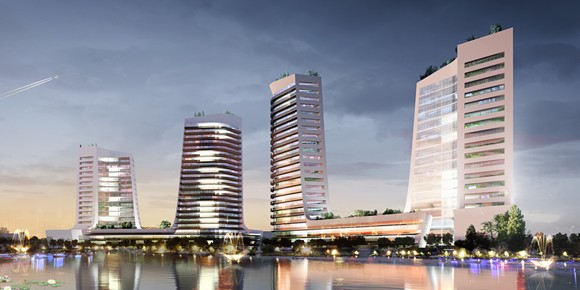 Route 192 has seen its tourist industry struggle post-recession, but a new massive development just might be the hope that the area needs.

Magic Development, an Orlando-based vacation developer, will begin work on a massive new $1.7 billion, 87-acre resort this summer. The new timeshare development will feature between five and 10 towers, all stretching well over 20 stories tall with the potential of being up to 40 stories. The first, a 25-story 251-unit tower, will break ground this year.

The project has a 25- to 30-year buildout, with a new tower being constructed every five years or so. Along with the condo timeshare towers, the new development will include nearly 400,000 square feet of retail.

A large pond will connect the towers with the retail area via a water taxi system. The retail area will also feature outparcels along 192.

The timeshares will be marketed mostly to South Americans. Wealthier Brazilians have flocked to South Florida to buy condos as a way to move some finances out of the foundering Brazilian economy.

The luxury development is being designed by Pininfarina, the Italian design firm behind many of the most iconic Ferrari and Fiat designs. Renderings of the new towers show modern, wavy-style towers and pedestrian areas. Multiple pools, restaurants and other resort amenities will be included in the resort.

Magic Development already has one timeshare development on 192 near Animal Kingdom. That development should fully sell out by end of the year.

Nearby, the Margaritaville resort complex, which will also include a boat taxi service, is now a very active construction site with vertical construction expected to begin by this fall.