Ahead of an I-Drive Chamber luncheon where Joshua Wallack will be giving details on the progress of his Skyplex development, we have numerous new specifics about all of his I-Drive area projects.

Skyplex, being the largest of his local projects, has gotten the most attention. The $460 million development has been pushed back by 4 feet along Sand Lake Road to allow for wider pedestrian pathways and for an FDOT road widening project. That southern edge of the development is where the massive "World’s Largest Perkins" will be located. Within the past week, Joshua Wallack confirmed certain aspects of the development, likely the coaster track, are already in production.

Also confirmed is the purchase of more adjunct land. The new land will allow for storm water drainage to be kept within the property itself. There have been some issues with the current drainage plan in the area. The current plan calls for storm water runoff to drain into Sandy Lake, a nearby man-made lake that is on Universal’s Wet ‘n Wild property. Universal is currently suing the county over the drainage into that lake.

The Skyplex development will include the world’s tallest roller coaster on one of the tallest towers in the region. The 350-room hotel that is part of the development should see a name announced for it in the coming months; the hotel brand is believed to be one that is new to the region. 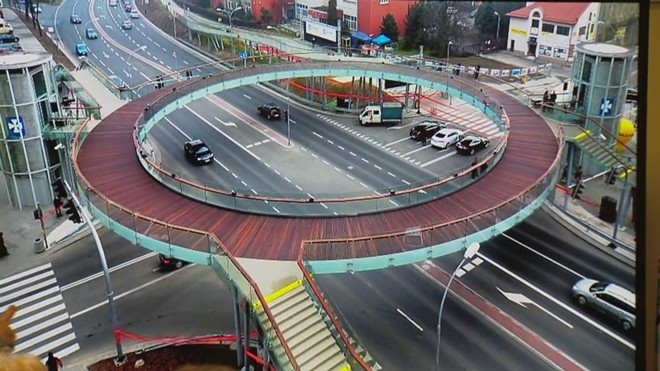 Directly in front of Skyplex will be a new elevated pedestrian bridge. Wallack has confirmed that he is still planning to help front the financing cost of the bridge to allow for its construction to take place faster than the county was planning. New renderings of the pedestrian bridge show a circular model with an elevator and stair entrance on each of the four street corners. The pedestrian bridge would also link to the newly opened Epic McDonald’s, "Home of the world’s largest playplace."

The final aspect of Wallack’s redo of the I-Drive/Sand Lake Road intersection is his Hollywood Plaza Garage. That garage proposal recently received approval to increase in size by two floors, adding 200 more spaces to it. Part of the reasoning behind the increase in size is the major crowds that have become a normal thing at the Mango’s Tropical Café club next door. A glass-enclosed rooftop restaurant and a ground floor retail space also received 500 additional sq. ft. each. Other updated aspects of the plaza include higher ceilings for both commercial spaces and a pedestrian plaza along I-Drive.

All three projects should break ground by the end of this year with the Hollywood Plaza opening in 2017 and the Skyplex opening by Summer of 2018.