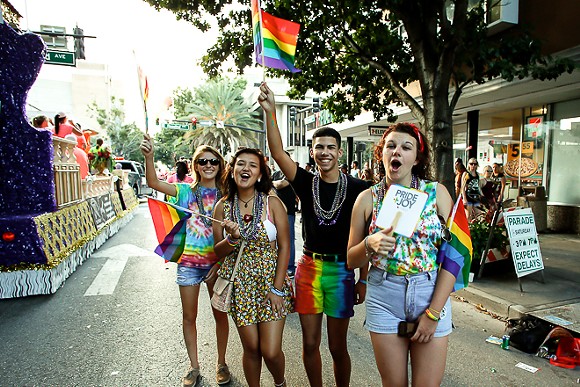 After high-profile backlash in several Southern states that have introduced anti-LGBT legislation, Florida officials are also coming under heavy criticism after backtracking on a proposal that would protect LGBT foster youth from discrimination.

The Department of Children and Families had proposed rule changes that would have banned anti-LGBT bullying, discrimination and conversion therapy, which attempts to change a child’s sexual orientation or gender identity. But after objections from religious groups, the rule now bans discrimination or harassment “on the basis of a child’s race, national origin, religion, gender, disability, or any other characteristic. The words “gender expression, sexual orientation” are crossed out of the proposed rule.

DCF Secretary Mike Carroll says the modified language in the rule expands protections for children “regardless of inherent traits, personal characteristics or past experiences.”

The Florida Baptist Children’s Homes and the Florida Conference of Catholic Bishops submitted letters to DCF in January opposing the original language. The Tampa Bay Times reports the letters “refer to being transgender as a "mistaken belief" and say setting aside gender identity and sexual orientation is "unwarranted.""

"The definition of 'sexual orientation' could encompass sexual conduct outside of marriage, thus legally affirming and specially protecting that conduct," says Michael Sheedy, executive director of the Conference of Catholic Bishops, in the letter. "Clearly, every child should be safe from bullying and harassment in the care of state of Florida. An expectation of abstinence for school-aged children from sexual activity should be established."

The News Service of Florida reports that by late January, the language religious groups opposed was gone. Last Friday at a hearing on the proposed rule, LGBT advocates and foster youth asked DCF to restore the proposed language.

Hannah Willard, spokesperson for Equality Florida, says that like anti-discrimination protections against race, religion and national origin, LGBTQ youth also need specific protections to provide a clear expectation that some behaviors won’t be tolerated. Between 20 to 40 percent of homeless youth in the U.S. identify as LGBTQ, according to Lambda Legal, a civil rights organization that focuses on these communities.

"DCF asked child welfare advocates for recommendations," Willard says. "It’s not accurate to say these protections are not needed when the department asked for them last year," she says.

Willard says the controversy surrounding this proposed rule change in Florida is part of the larger backlash the LGBTQ community has faced across the county since the U.S. Supreme Court ruled in favor of same-sex marriages last year. Recently, North Carolina lawmakers passed legislation that stops people from using a bathroom that doesn’t correspond to their biological sex.

"Really, what lies at the center of this is a denial of our existence, denial of our identities," she says. "The recent legislation that seeks to ban people from using the restroom is just trying to wish transgender people away. To see the proposed rule change from DCF, it was heartbreaking to see the word transgender struck through. It’s like seeing our identities erased. We deserve dignity and respect."

Willard says DCF is under pressure from Gov. Rick Scott and "far-right organizations." John Tupps, spokesperson for Scott, told NSF: "The governor's office collaborates with all state agencies and we are fully aware of rulemaking going on at DCF. We encourage all parties to provide their input during this process."

DCF is accepting the public’s opinion on the proposed rule until April 15.