Chef Clayton Miller talks of his latest venture – a soon-to-open 150-seat brasserie in the Bank of America building downtown – like it's the culmination of all his years in the business.

As majority partner in DoveCote, along with Gene Zimmerman (Courtesy Bar) and James & Julie Petrakis (Ravenous Pig, Cask & Larder, Swine & Sons), Miller knows expectations will be high, but he shrugs off any notions of "pressure" and, rather, gushes at the thought of bringing French cuisine to the downtown set, an idea borne from a conversation he had with James Petrakis.

"We didn't want such overdone concepts as barbecue or Southern," says Miller, "but the idea of French cuisine – approachable French cuisine with some twists – got us excited." 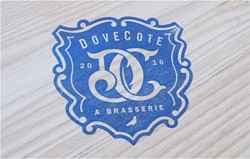 As part of the brasserie's offerings, Miller – named one of Food & Wine's Best New Chefs in 2010 – told me, at the risk of sounding gauche, that he's determined to offer the best French onion soup in the city.

A raw bar will also be a focal point of DoveCote's menu.

The marble-tiled lobby of the building will have open seating during breakfast hours, during which guests can order pastries and coffee (supplied by Illy) from the coffee bar inside the restaurant. Lunch service will commence at 11 a.m. with the restaurant shutting down at 3 p.m., then reopening at 4 p.m. for happy hour. 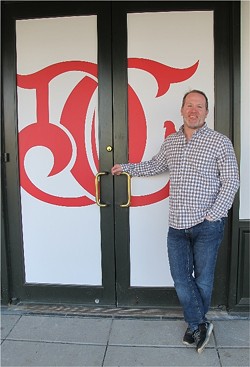 As far as the restaurant's overall aesthetic, don't expect a design rooted in art nouveau and gilded age glory. Andrew White, whose company lot1433 designed the interior of the Courtesy Bar, is overseeing the interior concept and says it will be "French-inspired," but "a bit of a mashup, with traditional French meeting a touch of modernism."

"The space will feel like it has been there for a long time and we just moved in and changed it a bit," says White. "Soft blues and creams, natural woods, and aged brass will deliver an atmosphere of history."

After high-profile stints at Daniel, the French Laundry and, more recently, Miami's Yardbird, Miller returns to Orlando for the first time since helping Norman Van Aken open Norman's at the Ritz-Carlton Grande Lakes.

DoveCote is expected to open mid-June.