'Jeb! The Musical' is here and it's hilarious 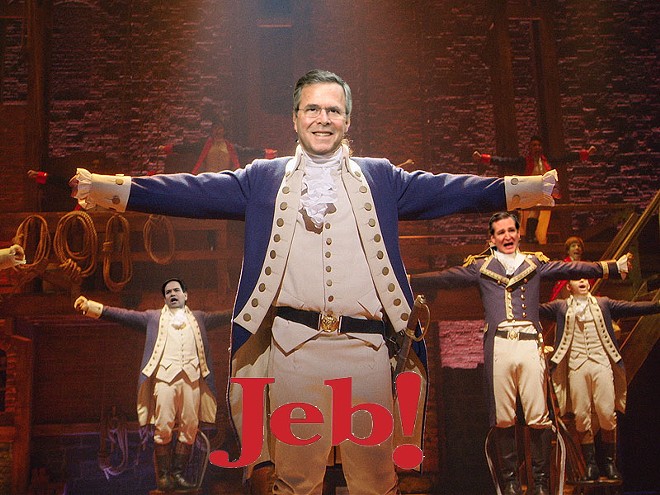 Some people who have way too much creativity and time on their hands invented the best thing to come out of the 2016 presidential campaign: "Jeb! The Musical."

The musical about the former Florida governor's failed presidential aspirations is a full-length parody of "Hamilton," the Pulitzer-Prize winning musical about the life of Alexander Hamilton by Lin-Manuel Miranda.

You can read and cackle the whole way through "Jeb! The Musical" at this Google doc. Some song highlights include:


Christie: Braaah! Braahh! I am Governor Chris Christie
Up in it, lovin’ it, runnin’ the Garden State, New Jersey
Close down your bridges and SubwaysTM, delays
These days, the gays are ablaze, please pass the mayonnaise?


Bernie (yelling and wildly gesturing): Hear ye, hear ye!
My name is Bernie Sanders, and I present
“Free Thoughts on the Proceedings of the War on Terror!”
Heed not the right wing, who scream about ISIS,
They have not your interests at heart.
Christie: Oh my god, tear this socialist apart.
Bernie: Regime change and bloodshed are not a solution
Don’t let them lead you to war
This Congress does not speak for me.
Trump: Loser! Weak!


Jeb: Where is my son?
Doctor Carson: Mr. Bush, come in.
They brought him in a half an hour ago.
He lost a lot of dignity on the way over.
Jeb: Is he still in the race?
Doctor Carson: He repeated the same line five times and appeared to be a robot.
Jeb: Can I see him, please?
Doctor Carson: I’m doing everything I can.
But the press was already on him when I arrived.
Jeb: Marco.
Marco: Daddy.
I did everything you said, daddy.
I dispelled the fiction that Barack Obama doesn’t know what he’s doing.
Jeb: I know, I know. Shh.


Trump: Poor Jeb couldn’t stop being a mess,
I destroyed him, it suffices to sa-ay
His body bleeding guacamole
This campaign process is just so huge, It’s just so inspiring, you know, and, we’re bringing tremendous amounts of people together, tens of thousands of people, really huge stuff,


The musical lists several contributors to the project and presumably fake reviews from Toni Morrison, Steve Buscemi and Herman Cain. Alex Cohen, listed as a spokesperson for the group, has not responded for comment.

Read the rest of "Jeb! The Musical" here.

UPDATE: Cohen says in an email that “Jeb! The Musical” was a collaborative project put together by Cohen and a bunch of strangers who met online in a Facebook meme group.

“We're all huge Hamilton fans, as well as huge Jeb! fans, and there are so many parallels between the show and the 2016 election that it was only inevitable that this had to happen,” Cohen says. “I've done a lot of work on it, but in no way have I done a majority - this masterpiece would not be possible without a huge amount of creative effort and genius lyricism, as well as the lovely help of a rhyming dictionary here of there. Plus we couldn't have made this without Lin-Manuel Miranda - Hamilton is the best. Or without Jeb!. His sad, sad, mess of a campaign brought tears to our eyes, and words to our keyboards.”