The latest Southern Fried Sunday (April 17, Will’s Pub) was one of the most indie editions seen so far, with none of the featured acts sitting squarely on the roots music bedrock upon which the venerable concert series is built. And because of the quality, it worked.

The touring headliner was Chicago band the Heligoats. Although a four-piece band live, it’s the vehicle of frontman Chris Otepka, an interesting character whose lyrical obliqueness even spilled over into offbeat between-song banter that constantly obfuscates the line between truth and imagination. Making it all even more dizzying are the layers and density of his thoughts, which spark with whim like a swarm of fireflies squeezed into a little jar. In terms of vocal style, he’s somewhere in the vicinity between Jeff Mangum (Neutral Milk Hotel) and John Darnielle (The Mountain Goats). In words, he’s endearing, funny and perplexing, all in rapid succession, like a sharp mind with a dial stuck on a different frequency and a broken OFF button.

Behind the irrepressible scramble and sprawl of Otepka’s singing was the nice counterbalance of sturdy, vaguely rootsy indie rock that motors reliably and knows when to crest and swell with seriousness. They take enough left turns to be colorful but move with a compass calibrated enough to not be niche. And it was one of those performances that converted the room.

Sharing the bill was Henry Toland, a local whose thoughtful and elegant music has impressed me before. His indie folk may be delicate, but it’s not at all wan or frail. The solo arrangement that so many singer-songwriters use to such basic effect is, in his voice and hands, a thing that spans the room, calmy but fully. Robust in unhurried confidence, Toland is probably – no, certainly – one of the most effective and voluminous quiet acts in the area. 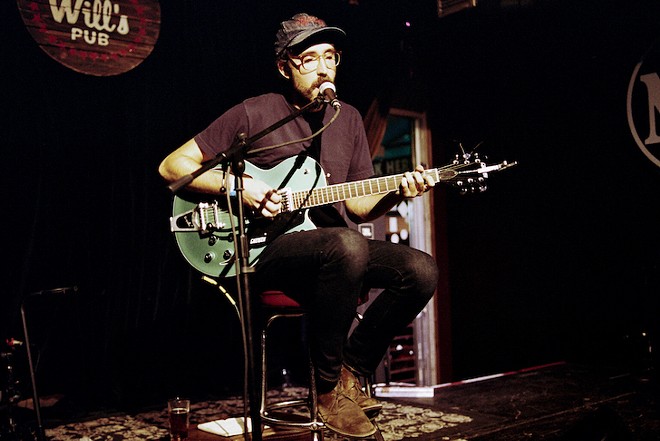 Also performing and also quietly commanding was Zoya Zafar, a relatively unknown local making her debut with both the concert series and the venue. Although she’s acoustic, she’s not conveniently folk. Her music is minimal but it’s not stark, with an atmosphere that’s velvet and a voice of total presence. Her soft but warm and sonorous singing exhales the smoke of classic jazz singers. Even in spite of a subdued mien and drift, Zafar’s alluring voice is one of those forces that can’t help but arrest. She’s still developing but, with that kind of natural smolder, she’s definitely one to watch.