Ever tried a peanut-butter-and-banana sandwich? Elvis Presley did. He loved them. And despite the odd-sounding name and lack of substantial nutrition, they’re really not that bad.

Elvis & Nixon (3 stars) is the peanut-butter-and-banana sandwich of 2016 cinema. It’s slight and a bit undercooked (if you want the sandwich fried, like Elvis did), but it’s nevertheless an interesting and enjoyable snack while we wait for something more delicious to come along.

The film, directed by relative newcomer Liza Johnson, tells a semi-fictionalized story of the real meeting between the most powerful man in the world and the most powerful man in American rock & roll. It’s December 1970, the hippie drug culture is in full swing, and Presley is not pleased. In fact, he’s so upset with the direction America is taking that he longs to go undercover as a “federal agent at large” in an attempt to battle drugs, alcohol and the counterculture that supplanted his reign with that of the Beatles. Oh, and he also wants a badge. 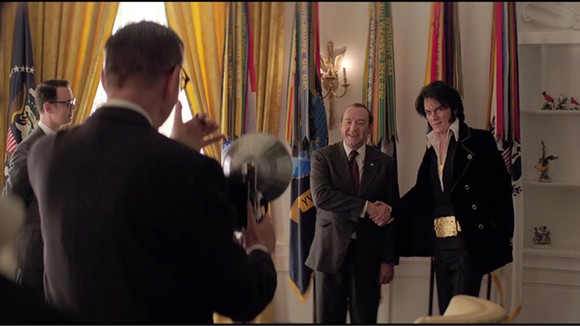 To get said badge, he shows up at the gate of the White House with a letter for President Nixon. After some behind-the-scenes wrangling, the meeting is arranged, and the rest, as they say, is history, albeit undocumented history, as no one really knows what went down in that meeting. But that’s where writers Joey and Hanala Sagal and Cary Elwes step in, creating a captivating and probably fairly accurate account of that surreal encounter.

The film might have focused just on the meeting, à la My Dinner With Andre, but instead it pads its still-brief runtime of 86 minutes with West Wing minutiae and a subplot involving Presley confidante Jerry Schilling (Alex Pettyfer). While some of that works, most of it takes attention away from what we’ve all come to see: Michael Shannon as Presley and Kevin Spacey as Nixon. And they both are up to the task.

Eschewing comedic impersonations, the two accomplished actors balance imitation with mature re-creation while still producing some very funny moments. By understanding that they had to bring the two icons to life without making fun of them, they allow Elvis & Nixon to rise above its TV-movie feel and become an enjoyable if pedestrian dramedy. Spacey is better suited to Nixon than Shannon is to Presley, but this is nevertheless Shannon’s movie. The script focuses more heavily on his character, and thanks to a surprisingly delicate performance, the actor is able to expose a rather sad, delusional and realistic King instead of a caricature.

There’s not a single Presley song in the film, perhaps due to the producers’ failure to secure the rights. But there’s still plenty of Presley’s spirit, and watching that spirit interact with the crusty Nixon is an odd and amusing pleasure, albeit a slight one.