A Ferrari World theme park is coming to North America, and Orlando is probably in the running for it

Ferrari, known for their fast cars and impressive design, has quickly become a major player in the world of theme parks, and the latest rumors point to a possible expansion right here in Central Florida.

Ferrari got into the theme park game when it opened its first park in Abu Dhabi back in 2010. That park, a partnership between the famed Italian sports car brand and Abu Dhabi leisure operator Farah, is the world’s largest indoor theme park and is home to an ever increasing line-up of cutting edge rides. The world’s fastest roller coaster, Formula Rossa, calls the park home and is famous for requiring riders to wear safety goggles, among other things. The park is also home to the world’s tallest non-inverting loop coaster and numerous other rides. A Soarin’ style flying theater, go-karts and even a teacup style ride all call the park home.

Plans are in the works for a park in China as well, but earlier this month Bloomberg spilled the beans on the future of the luxury brand including plans for a North American park. 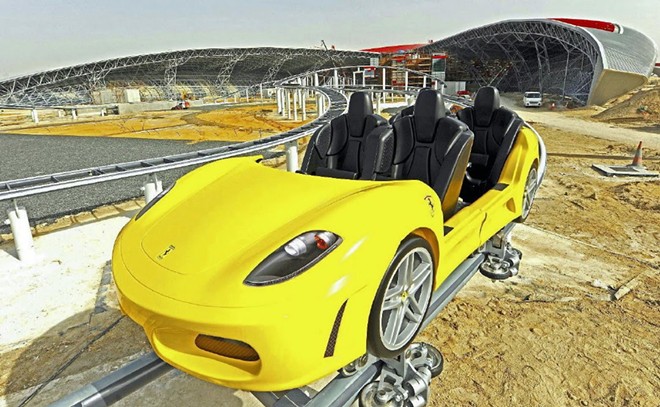 Rumors of Ferrari building a boutique park in the Orlando market stretch back to at least 2010, with rumors gaining momentum during the 2014 IAAPA attractions expo (the giant amusement expo that comes to town every November). It was at that 2014 IAAPA expo that quite a few vendors confirmed (off the record) that a major, multi-ride attraction was coming to Florida. This could be Joshua Wallack’s Skyplex development that was announced during that same time period, but many indicated to various media that a different project was in the works. Now, vendors always like to talk up their brands, so it’s wise to always take everything they say with a grain of salt.

All three Ferrari World parks currently in development are partnerships with third parties. If one is built here a similar scenario is likely. What makes the Orlando market stand out is the shift to higher-end experiences that the market has seen over the past 14 or so years. Add on top of this the fact that many analysts view the Orlando market as saturated with full day parks right now. While the market here may be saturated with full day options, very few boutique options exist.

The unique thing about these smaller boutique parks, like both Discover Cove or the soon to open Cirque du Soleil theme park in Mexico, is they cater to convention groups as much as they do to regular vacation goers. It’s no secret that conventions are big business in Orlando. Even things like Diagon Alley at Universal Orlando are designed with this in mind. That Harry Potter land is designed to host after-hours events with easy backstage access and full catering options. Disney’s new Star Wars and Avatar lands will likely follow a similar design.

Universal has been long rumored to be interested in opening a third park in Orlando on land they own directly across Universal Boulevard from the Orange County Convention Center. Rumors have ranged from Lord of the Rings (which they don’t currently own the rights to) to Nintendo, but with the market more or less saturated to the point of opening yet another family oriented park, it would seem a little odd.

Skyplex, who Universal attempted to block from opening, will house the world’s tallest roller coaster while SeaWorld is planning on opening the region’s first hypercoaster next month. Universal’s current parks are close to residential areas blocking much of the park space from new large, outdoor thrill rides. A coaster-centric third park, if branded properly, could help position Universal as a great alternative for coaster enthusiasts visiting Orlando.

It’s not beyond the realm of possibilities to see Universal partnering with a third party to open this third park, whatever it may be. Universal has a long and successful history of working with third parties including Warner Brothers, who owns the rights to Harry Potter, and Genting Group, who own and operate Universal Studios Singapore.

The thing that Universal has confirmed is interest in building upwards of 10,000-15,000 more hotel rooms in this market. Now some of those will likely go on the land currently occupied by Wet n’ Wild but that’s a lot of hotel rooms for that 30-acre park.

There’s no official word on where the North American Ferrari World is going but there is plenty of speculation that Orlando is at least in the running for it.

In the meantime, you can get your Ferrari fix locally when the Ferrari World Finals come to the Daytona International Speedway this December. This will be the first time that event, which is usually held in Italy and more recently in Abu Dhabi, will be held in North America.