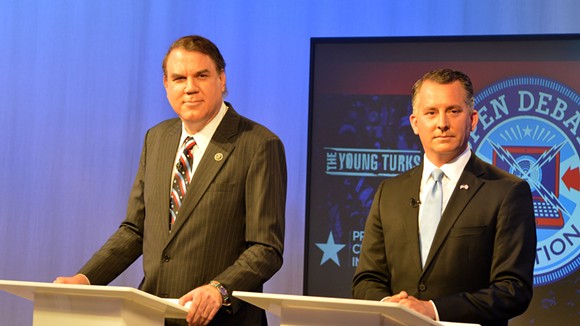 Floridians had a seat at the moderator table in the state's first U.S. Senate debate between two of the seven candidates looking to replace Marco Rubio.

U.S. Reps. Alan Grayson, D-Orlando, and David Jolly, R-Indian Shores, were set to debate the top 30 questions out of 900 submitted online to the Open Debate Coalition, says Lilia Tamm, the program director for the coalition. Over 400,000 votes were cast for questions on campaign finance reform, climate change, student debt, Social Security and abortion. The debate, held at the University of Central Florida, was streamed online and was available for broadcast to any TV station. The Miami Herald reports the candidates announced they would debate each other after a poll showed them leading the race in their respective parties, but "nearly half of voters in both parties were undecided in that poll, which came before a fifth Republican candidate entered the race."

Jolly focused on his newly proposed "Stop Act," legislation that would ban federal elected officials from personally asking for money. Jolly says issues arising from climate change can be solved with incentives, not mandates; that the federal minimum wage should be based on an index, like in Florida, not just raised to $15 because that would kill jobs; that life begins at conception and Planned Parenthood should be disqualified as a vendor; and that Social Security and Medicare should be secured for people now, but that changes to the system should come before it fails.

“Let’s get members of Congress off the phone and shaking down the American people for money,” Jolly says.

Following in the steps of presidential candidate Bernie Sanders, Grayson says he would put an end to the "too-big-to-fail" financing system and defended the right to an abortion, saying he had helped to open a Planned Parenthood clinic.

"If men could have abortions, you could probably get them at a slot machines," Grayson says.

Absent from the debate were questions about the candidates' voting records or questions on the alleged ethics violations that Grayson faces.