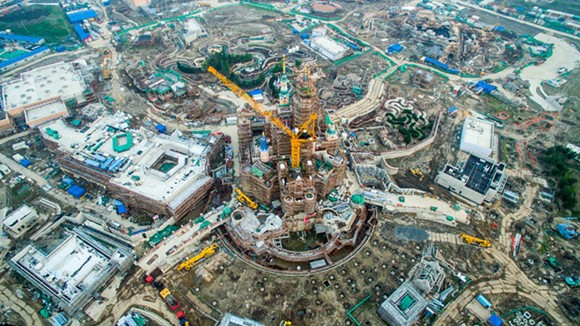 While Disney readies to open its most ambitious resort project with Shanghai Disney Resort, just a short flight away, the world’s largest entertainment company is struggling to turn around the fledgling Hong Kong Disneyland.

Since opening in 2005, Hong Kong Disneyland, which includes a Magic Kingdom-style park and two hotels, has struggled. After overcrowding the park just before it opened, the Hong Kong government, who owns a controlling stake in the resort, encouraged Disney to lower its capacity elements, now the tiny location (half the size of the original Disneyland) has one of the lowest capacities of any Disney park.

According to the TEA estimates (the industry standard for attendance numbers), the park welcomed a mere 5.2 million guests its first year but saw a 13.5% drop the following year. It wasn't until 2012 before the park saw its first profits, a meager $14 million.

Disney attempted to draw more tourist in with an aggressive nearly half a billion dollars expansion, which saw the opening of the second Toy Story themed land in Disney history in 2011. A very similar land, but with a more thrilling family coaster, is currently being constructed at Hollywood Studios here in Orlando.

The following year, a Grizzly Gulch-themed area opened with an updated version of Big Thunder Mountain. A third mini-land with an impressive dark ride loosely inspired by the Haunted Mansion open in 2013.

Between 2010 and 2013 the park saw healthy double-digit growth. By 2014, an estimated 7.4 million guests were visiting the park every year. That would still rank the park second to Hong Kong’s Ocean Kingdom park. By comparison, the Magic Kingdom, the busiest theme park in the world, had an estimated 19.3 million guests in 2014. Unlike the previous 4 years, Hong Kong Disneyland also saw weak attendance gains in 2014 with a mere 2.4% increase year over year.

Ocean Park in Hong Kong is in the midst of an aggressive campaign to win back guests from Disneyland and few new attractions are in the works. A new Iron Man-themed simulator ride, similar to Star Tours, should open this year.

A new hotel, in a similar design to Animal Kingdom Lodge, is slated to open in 2017.

Earlier this year, the park reported its first loss in five years. It closed out the fiscal year $19 million in the red. Attendance for 2015 was off by 9.3% with its biggest drops being from Mainland China visitors, who make up roughly 40% of its guests. The year prior, Mainlanders made up 64% of the estimated guests at HKDL.

In March Andrew Kam, who had served as the managing director of HKDL for eight years, left for “personal reasons.” He was quickly replaced by Samuel Lau, who was serving as the VP of Operations for the resort after spending time in Orlando as the VP of Epcot.

Now, weeks away from opening Shanghai Disney Resort, the petite Hong Kong park has dropped its prices. Hotel rooms are going for half of what they went for just a few months earlier. An ocean view room in the on-site hotels is now going for just over $200 a night. The Grand Floridian, which the HKDL Hotel mimics, has room averages well over 2 and half times those rates.

Day tickets to the park have also been slashed with special rates for nearby Guangdong residents as low as $38 a day.

Disney is also offering free luggage storage for day guests and even is helping subsidize bus tickets for guests visiting the park. Guangdong residents can receive a 20% discount on return bus tickets after visiting HKDL.

In mid-April, Disney also let go of 100 employees with no warning. That caused a small protest to take place at the resort.

Shanghai is expected to cannibalize any hope of growth at HKDL. With a Magic Kingdom-style park that’s three times the size of Hong Kong’s, Shanghai has already proven to be a hit; opening day tickets were sold out within 5 minutes after going on sale earlier this year. Off-peak tickets to Shanghai Disneyland are roughly 20% less than similar tickets at the struggling Hong Kong park, making HKDL even less desirable for mainlanders.

Hong Kong’s tourism board is already expecting a 1.8% drop in overall tourists to the territory this year. Rumors are running wild on what the future of Disney’s lowest performing resort will be. With Disney focused on major overhauls at Hollywood Studios, Animal Kingdom and a major cash investment into Paris on top of opening the insane new Shanghai resort, it’s not a lot to understand why the company has yet to focus its attention on Hong Kong.

With limited expansion plots and fierce competition, including soon from itself, one has to question what they can do with this minuscule park.