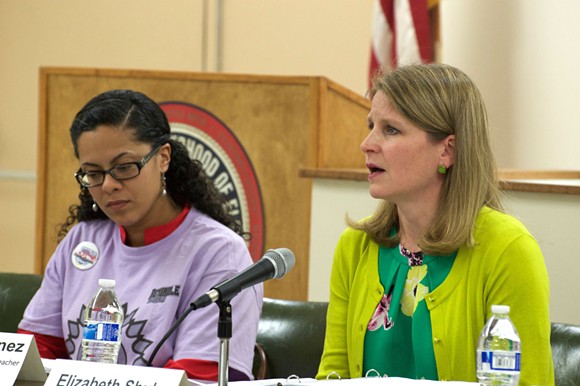 The top issue for women in the workforce is still being paid less for doing the same work as men, despite being about half of the labor force, says AFL-CIO secretary-treasurer Liz Shuler.

Shuler, speaking at the Young Working Women's Forum in Orlando on Monday, was citing a survey of 23,200 working women, mostly union members, conducted by the AFL-CIO. Out of 21 issues, 46 percent of the women surveyed chose "equal pay for equal work" as their top issue they would consider taking action to change, followed by affordable health care, at 33 percent; guaranteed health care for all, at 28 percent; affordable higher education, at 26 percent; and raising the minimum wage, at 19 percent.

"We have to make sure everyone's voice counts in this election," Shuler says, "No matter what candidate...We want to make sure the issues that matter to working women are front and center."

Shuler says part of that means turning union halls and labor networks into centers for action that include issues important to women such as equal pay, workplace rights, paid family leave, affordable child care, reproductive rights, immigration reform and unique issues faced by communities of color. The majority of leaders in the labor movement are still men, and this effort has to unclog the leadership pipeline so more women can rise up through the ranks, she says.

"The labor movement is a women's movement," Shuler says. "If you think about it, [unions] represent over 6.5 million women. We're the largest women's organization in the country A lot of people think of unions as sort of a male-dominated environment, but in fact, union women will be half of the labor movement in 10 years."

Shuler was joined by local female union members who echoed some of the same concerns as women in the survey, such as scheduling conflicts, stretching dollars to put food on the table, working while being caretakers and trying to earn a living wage.

"A staggering number of women are not only getting paid less, but their time is going everywhere," says Rachel Martinez, one of the panel members. "If it's not your children, it's your parents. Sometimes I think our hearts are so big it diminishes our voice...When we know we're the only key to whatever it is our children have or whatever it is our family needs, we're more likely to stay subtle and stay quiet."