Country-rocker Matt Woods is from Knoxville but practically has dual citizenship here with how often he comes through. And though he may not have the most sizable following here, he has something that most buzz-bands-du-jour can’t claim: real ride-or-die fans. His people are the kind who don’t just go to every one of his frequent shows but rack up ridiculous bar tabs buying an elephant-killing amount of alcohol for themselves, their friends (the ones they came with and the new ones they just made that night) and the musicians. These folks are the pure lifeblood of live music whose red carpet has lifted acts like Lucero and American Aquarium to such prominence.

Woods’ stop this time was a relatively rare full-band appearance with a quartet (May 1, Will’s Pub). Unsurprisingly, they brought lots of complementary atmosphere and horsepower to his blend of defiant spirit and traditional soul. 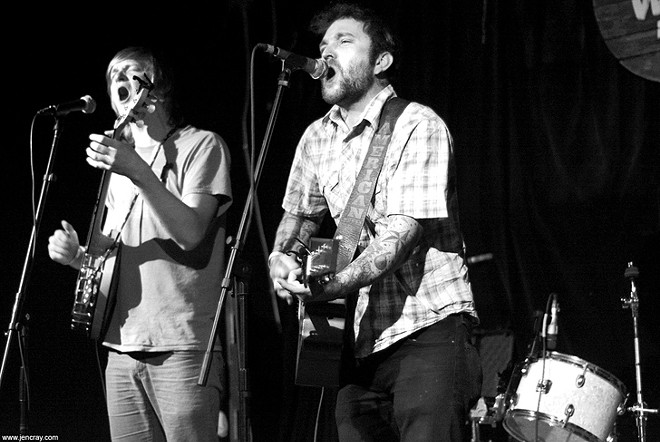 Indiana’s Jeff Shepherd and his Jailhouse Poets bandmate Marco Sassman opened by hitting that sweet folk-punk spot between grit and heart. Even if their synchrony wasn’t always locked, they at least have the kind of real country conviction where the banjo is a pillar, not an accessory.

With the exact same banjo-and-guitar setup, however, Gainesville’s Big Shoals showed this arrangement’s capability for real folk majesty. Even as just a string duo, they stroked fully, beautifully rendered sonic landscapes with their cinematic brand of Americana. Theirs is an authentic vein that has seriousness of emotion, depth of soul and precision of melody. It’s the quintessence of Southern grace, and it was the best surprise of the night.