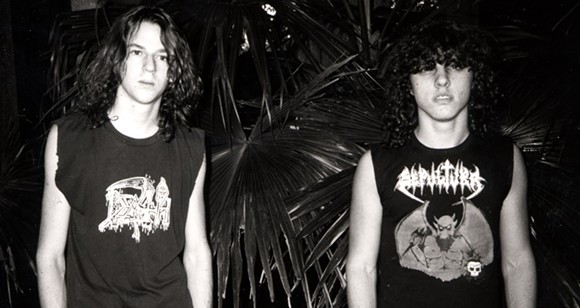 Relapse Records have released the never-before-heard "Legion of Doom" demo from Orlando death metal pioneers Death in advance of their reissue of the band's 1987 debut Scream Bloody Gore.

Death was the bloody brainchild of Chuck Schuldiner (1967-2001), started originally as Mantas in 1983, when Schuldiner was only 16. Influenced by the likes of Slayer and Possessed, Schuldiner and his early collaborators kept on amping up the ugliness and intensity of their music until they stumbled upon a sound that was very much their own, a primitive, guttural noise that would later be dubbed "death metal." (Appropriately enough.)

It's hard to beat the early template that Death laid down on Scream Bloody Gore, a blur of hyperspeed drumming, blown out guitar noise, and the infamous vocal style that reminds one as much of a demon as it does Cookie Monster. Unlike many who came after him, Schuldiner had riffs for days, and an uncanny knack for melody that could even be heard amidst the vile clatter. Scream Bloody Gore kickstarted a death metal renaissance in Florida, including bands like Obituary, Morbid Angel and Malevolent Creation.

Listen to the instrumental "Legion of Doom" below. Scream Bloody Gore is re-released on May 20th.