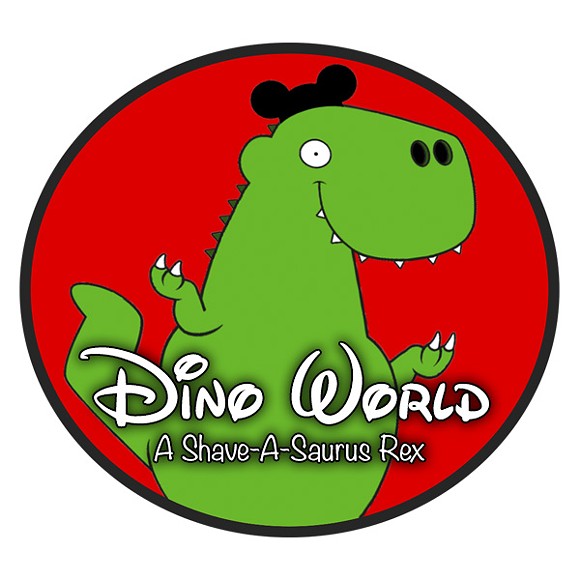 In a world where mashup musicals spoofing '80s films have spread across the Fringe, Dino World: A Shave-a-saurus Rex is … yet another one. Little Timmy Bucket (Ulsan Kazenas), bullied for his obsession with uncool dinosaurs, finds a golden ticket in a can of Barbasol and wins a trip to Dino World, where Col. Hammond (Sam Watters) has resurrected fossilized reptiles with the help of DNA extracted from the frozen head of Walt Disney.


Worry not; a lawyer (Andee Atkins) is on hand to makes sure they stay on the right side of parody law, along with a fey faux-Jeff Goldblum (Billy Thompson), a skinny pseudo-Chris Pratt (Arius West) and a prickly Laura Dern-like paleontologist (Dana Rozier). Duplicitous Newman (Christopher Juan Luis-Jorge) sabotages the security fences at the behest of film director Christopher Nolan (Justin M.G. Hughes), who wants to top Spielberg in merchandisable movies. The terrifying Androgynous Rex (Taylor Wright) is released, along with a flock of lesbian raptors (Reigan Paulovich, Chloe Brewer, Mikayla Philips, Maddie Crump), and it's time for everyone to run and scream – or at least dance and sing.

Dino World is a dynamite concept that should deliver more laughs than it does. The script by Hughes and Taylor Schwarz has its fair share of sharp satirical gags, but often falls back on obvious references to the original movie. It may have been better off as a non-musical comedy, as the pastiche melodies are all either borrowed or entirely unmemorable, and usually go on far too long; the fact that most of the cast are better comics than vocalists doesn't help.

In the end, while the material falls far short of being the next Evil Dead or Little Shop, director Cody David Price injects just enough energetic fun into the folly that I'll give Dino World a mild thumbs-up for fans of absurdity; after all, it's hard to hate on any show with zombie dinos in glitter body paint biting people's arms off.