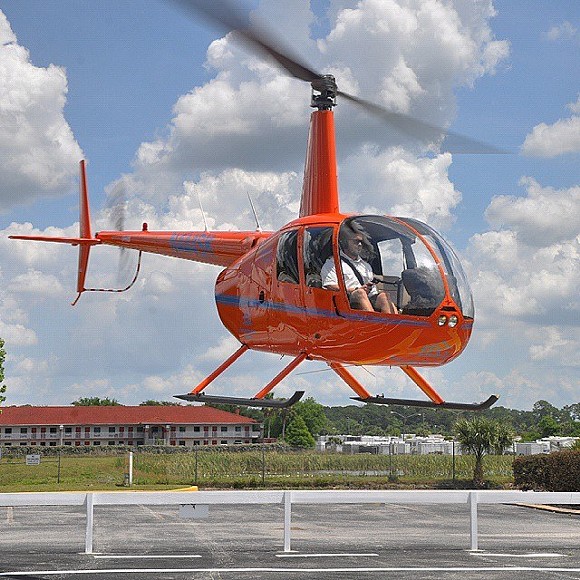 I-Drive has been going through a major renaissance lately, but it’s not just new hotels and restaurants. The latest trend in the tourist district is all about helicopter touring companies.

Local helicopter tour company Leading Edge is behind the new, single-pad heliport. Leading Edge is known for its $15 tours and they currently have locations in Kissimmee and Clermont.

The latest proposal calls for a single pad heliport on the west side of Artegon’s property at the intersection of Fun Spot Way and International Drive. The helipad would sit along I-Drive, helping bring more attention to the fledgling ‘anti-mall.’ A logo for Artegon is shown on the landing pad itself in documents submitted to the city. A small, 600 sq. ft. metal and glass sales building will feature a small indoor waiting area with two picnic tables in a covered area off to one side of the building. It will be across the parking lot from the main mall.

Up one block there’s a helipad proposed for the top of the iSquare mixed-use project. While the other vertiports are mostly for tour attraction use, the iSquare location will likely be for private use by hotel guests mostly. No tours have been confirmed from this heliport facility. This helipad will be one of the highest in the area, sitting 350 feet in the air.

At I-Drive 360, the rooftop parking area of the parking garage is being converted to yet another heliport. While this one will be on top of the seven story parking garage, it will still be roughly a third the height of the one at iSquare. A sales counter for the I-Drive 360 helicopter tour group will be near the central plaza at I-Drive 360. Unlike the other locations, this one will also have the most obstacles around it; within the same complex is the Orlando Eye and the soon-to-break-ground StarFlyer attractions.