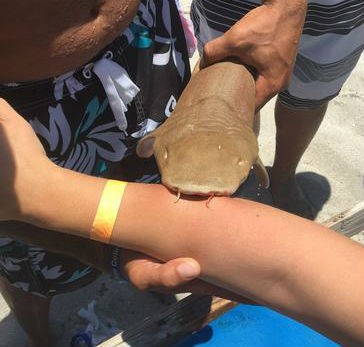 A small nurse shark refused to release the forearm of a woman it had just bitten at a Boca Raton beach, even as the woman was being transported to the Boca Raton Regional Hospital.

The Sun Sentinel reports the shark didn't let go of the 23-year-old woman's arm even after it died. Other beachgoers told the newspaper that before the incident, someone had antagonized the nurse shark in the water.

"The shark wouldn't give up," Shlomo Jacob tells the Sentinel. "It was barely breathing but it wasn't letting go of her arm, like it was stuck to her or something."

The Sentinel reports the woman was slightly freaked out about having a shark seize a sizable chunk of her arm, but she was later in stable condition. The National Park Service says that usually, humans and nurse sharks swim by each other without issues.

"Attacks on humans are rare but not unknown and a clamping bite typically results from a diver or fisherman antagonizing the shark with hook, spear, net, or hand," the organization says. "The bite reflex is such that it may be some minutes before a quietly re-immersed nurse shark will relax and release its tormenter."